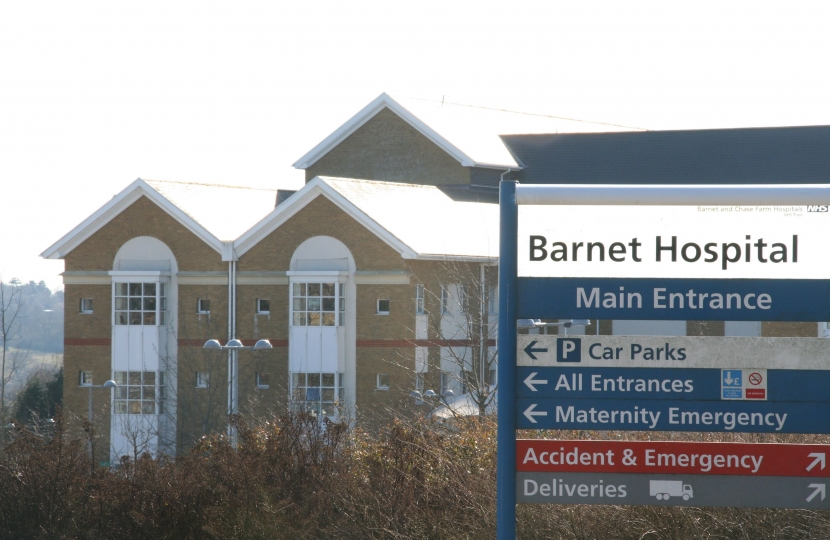 At a time when emergency departments are under pressure throughout the country, Theresa Villiers, MP for Chipping Barnet, has praised the work of local NHS staff and welcomed longer opening hours of the Chase Farm Urgent Care Centre.

Theresa Villiers said: “With the NHS experiencing such a hugely busy winter period I sought a briefing from the Chairman of the Royal Free Foundation Trust, Dominic Dodd, on the performance of A&E at Barnet Hospital. He informed me that in December there was a 13% rise in A&E attendances, 1,149 more patients, compared with December 2013. Over 89% of patients are being seen within four hours.”

“I would like to pay tribute to the staff at Barnet Hospital. They are all working incredibly hard to deal with the increase in the number of people going to A&E, and I welcome the plans being taken forward by the hospital to get back to meeting the 95% target.”

“It is also good news that the Urgent Care Centre at Chase Farm Hospital has had its hours extended and is open from 8am to 10pm seven days a week. I called for this to happen during this very busy winter period. I believe it will help give people the care they need and will also relieve pressure on A&E at other local hospitals. The funding for this is coming from winter resilience money provided to NHS England by the Government.”

“The NHS is busier than ever before – but there are plans in every area to manage the extra demand. More and more people are arriving at A&E across the country, with over a million more visits a year than in 2010. But the Conservatives’ long-term economic plan means we have been able to protect and increase the NHS budget. The only way to secure a strong NHS for the future is to have a strong economy.”

“This means we have been able to deliver almost 1,200 more A&E doctors, including 400 more A&E consultants, than in 2010. We’ve also made a record £700 million available, and planned earlier than ever, to help ease A&E pressures this winter. Overall, the NHS is doing more than ever before to treat people when they need it. Compared with 2009/10, A&Es in England are now able to see 2,000 more people a day, and nine in ten patients are being seen within the target time of four hours.”

It is estimated that around 1900 patients may access the Chase Farm Urgent Care service during the extended hours over the first six months, based upon the current activity levels seen within the centre.

A joint public information campaign by Enfield, Barnet and Haringey CCGs called Choose Well has been running since winter 2013.  This campaign signposts patients to the most appropriate service for their health needs, including the message about using A&E only for serious and life-threatening injuries or illnesses. The campaign includes posters, leaflets, cards and banners which were delivered to every healthcare provider in the three boroughs including GP surgeries, hospitals, walk-in centres, urgent care centres, pharmacists, dentists, opticians and other local facilities, including libraries.