Securing the best schools for Barnet 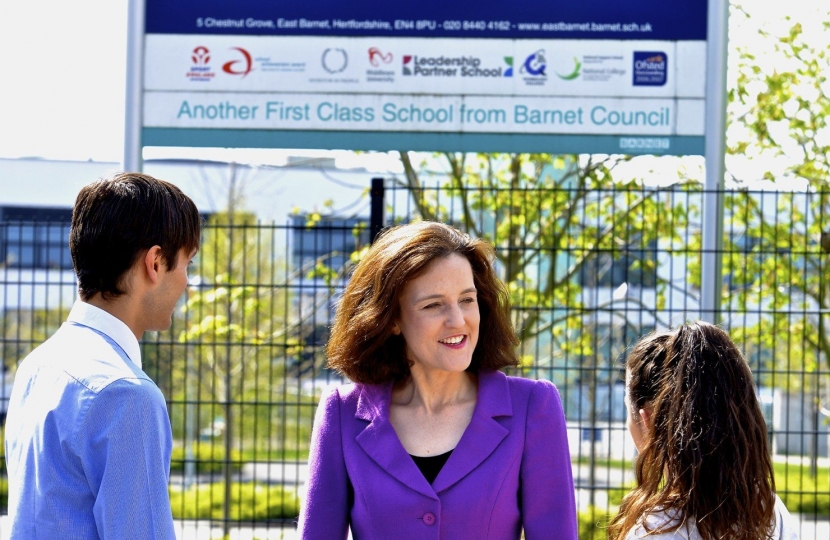 Barnet has some of the best state schools in the country and Theresa Villiers has worked hard to support them. She helped our top performing secondary schools gain academy status, and was strongly supportive of two new schools set up in her constituency serving Barnet’s diverse communities.

The first is JCoSS in East Barnet, the UK's first cross community Jewish secondary school. The second is the St Andrew the Apostle school in Brunswick Park. This is the country's first ever Greek Orthodox school and one of the Conservative Government's new free schools. Theresa also worked alongside neighbouring MPs David Burrowes, Matthew Offord and Mike Freer to successfully lobby the Department of Education to save minority language A-Levels from abolition. If A-levels in languages such as Greek had been scrapped, flourishing local supplementary schools such as Manor Hill would probably have had to close.

Theresa has welcomed the increase in primary school places in Barnet which has taken place due to action taken by Barnet Council, with support from Government.

Theresa successfully campaigned for funding to rebuild Cromer Road School. Cromer Road is an excellent primary school but many its buildings have become very dilapidated. For the last ten years, the governors and staff have been trying to get the school rebuilt and sought Theresa's help. She raised this directly with the then Education Secretary, Nicky Morgan, and Cromer Road was put on the list of schools which will receive a major rebuild funded by Government.

The Pavilion School has also been awarded funds by the Government for a new building at its Chandos Avenue site. The Pavilion is a pupil referral unit meeting the needs of children and young people who, for a range of reasons, have not been able settle into mainstream schools. Theresa visited the Chandos Avenue and Meadway campuses of the Pavilion in February 2017 and praised the work of students and staff at this excellent school.

For the last three years, Theresa has been campaigning for more funding for Barnet schools. She has raised this issue with the current Prime Minister and his predecessor. An increase in schools funding was announced in the summer of 2016. On becoming Prime Minister, Boris Johnson confirmed a further major uplift in school funding committing £14 billion over 2 years. This includes a real terms increase for every school in Barnet, and a substantial increase in support for children with special educational needs and disabilities.

November 2020: Villiers campaigns to save Maintained Nursery Schools in Barnet

September 2020: Villiers comes to the aid of local Greek School

May 2019: New school for Ashmole Primary