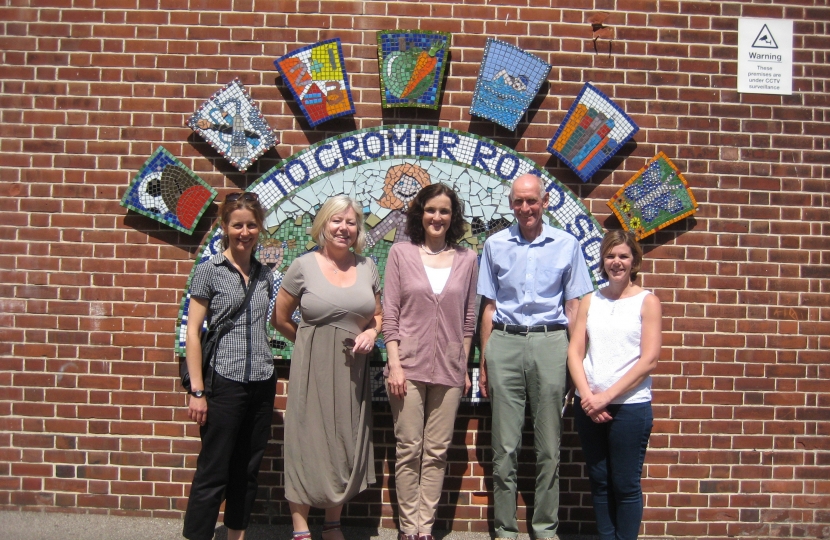 Theresa Villiers, MP for Chipping Barnet, has lobbied the Secretary of State for Education, Nicky Morgan, in support of an application by Cromer Road Primary School to be included in the Government's Priority Schools Building Programme. This took place at a meeting in the House of Commons this evening.

Following the meeting, Theresa Villiers said: “I have been a long time supporter of the efforts to get Cromer Road School refurbished, working on this with High Barnet ward councillor, David Longstaff, the chairman of the Governors, Bill Webster, and the head teacher, Helen Schmitz."

"Cromer Road is a great school with excellent results, an inspirational head teacher, and committed and hard working school governors.”

“It’s a great shame that its buildings are in such a poor state. A number of them are temporary structures put up in the 1940s which no one would have expected to be still in use more than 60 years later.”

“I was shown round the school during my most recent visit in the summer and saw for myself the problems faced by teachers and children. The staff do their very best to deal with these poor conditions, and the council have tried to help with some improvement works, but a major refurbishment is clearly needed.”

“Resources are limited because of the pressing need to deal with the deficit. This is why Cromer Road School has lost out up to now, despite being given very high priority by Barnet Council in bids for Government funding. The school submitted a bid in July for funds from the Government’s Priority Schools Building Programme for 2015 to 2021. A decision is expected in December.”

“I feel there is a clear case for putting Cromer Road at the top of the priority list for a share of this funding for much needed improvements. This is what I said to Nicky Morgan this afternoon, repeating representations I made to her predecessor, Michael Gove, on this.”

“I pay tribute to the work done by Bill Webster, Mrs Schmitz, and all the parents, governors and teachers who have been fighting for these improvements to go ahead. I will continue to support their campaign.”

Theresa Villiers visits Cromer Road School to hear the concerns of teachers, governors and parents regarding the poor state of the school buildings