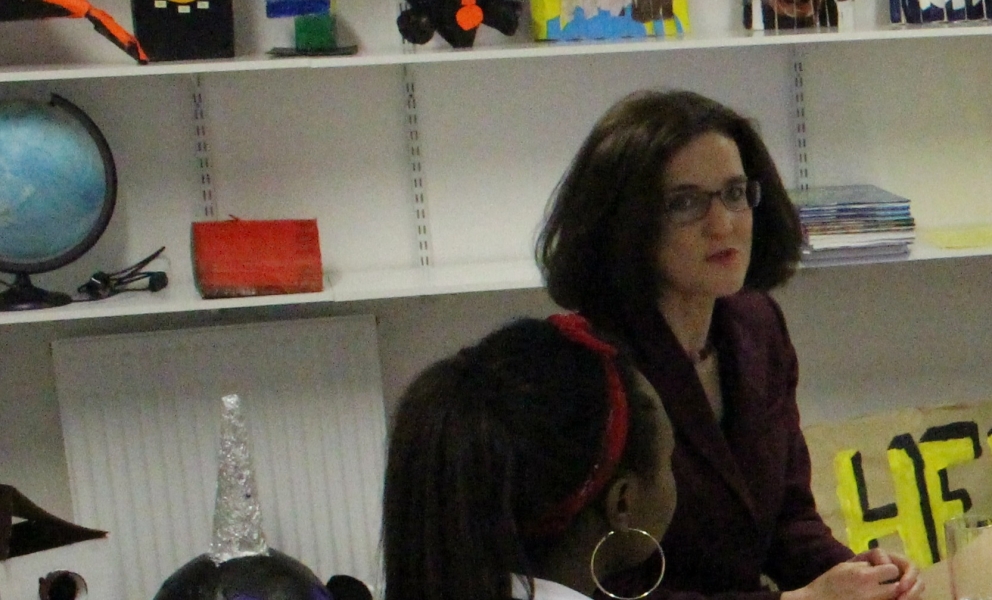 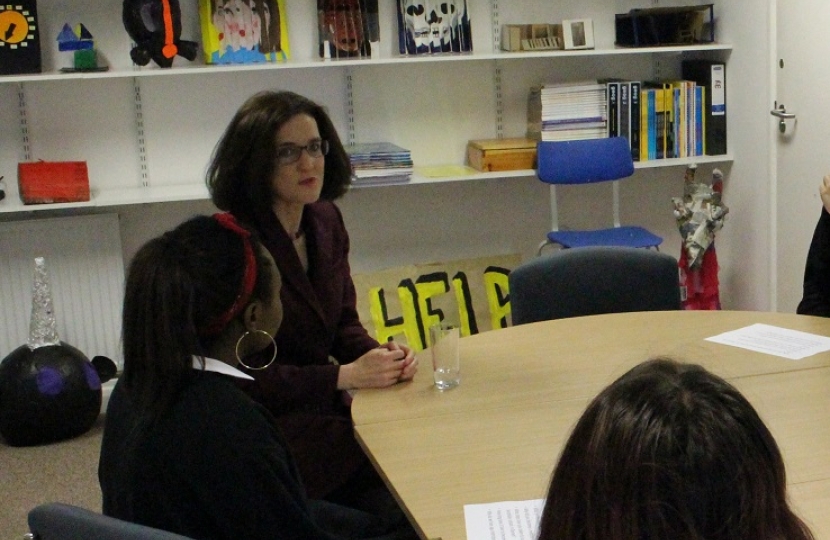 Theresa Villiers, MP for Chipping Barnet, met students and teachers at The Pavilion on Friday. The school, whose motto is ‘Education is Freedom’, is a pupil referral unit which teaches young people who, for a range of different reasons, are not able to take part in mainstream education. Theresa was shown round two of the school’s three campuses in the Chipping Barnet constituency, met pupils and teachers, and joined students for a lively debate about Donald Trump and other issues.

The school’s three campuses are in the Meadway in High Barnet, Chandos Avenue in Whetstone, and at Barnet Hospital. The Whetstone campus is for young adults who have been permanently excluded from school and are unlikely to integrate back into mainstream education. The Pavilion provides an education, either in traditional subjects or through vocational training, to help them achieve their potential. The Whetstone site is due to be rebuilt under the Government’s capital funding project for schools.

As well as working with other Barnet organisations such as the Barnet Football Club and the Finchley Boxing Club to provide activities for students, the school launched a ‘Woodland Project’ at the Meadway site, where students worked with parents, teachers, and local residents to revitalise an abandoned area of woodland space. The project was endorsed by Cllr Brian Salinger, Chair of the Pavilion Management Committee.

Theresa Villiers said: “I was very impressed by the Pavilion and the work of both staff and students there. We have some excellent schools in Barnet and the Pavilion is one of them. It does great work with young people who have found it hard to fit into a mainstream school. I would like more people to be aware that the Pavilion is a real success story, helping children and young people achieve their potential.”

“I enjoyed meeting pupils at the Whetstone and Meadway sites, as well as seeing the Woodland area at the back of the Meadway school which is a really welcome example of parents, students and residents working together to improve the local environment and provide a much valued educational resource. I was impressed with the students I met. We had a good debate; their comments and questions were perceptive and well-informed. I wish them well for the future.”

Joanne Kelly, Headteacher, said: “Theresa’s visit was a fantastic opportunity for the young people to meet their MP. Quite often, the perception of our young people within the community is negative and for them to have an experience like that, where they feel valued and important, was fantastic.

“We are a stepping stone for success for the young people. We manage young people with a variety of needs but the one thing they all have in common that they deserve a chance for success and a positive future. It was lovely that Theresa recognised that.

“It’s hard work at the Pavilion but the payback is amazing. When you get a young person who comes back to visit to say ‘I’ve done it’ and they’ve done A-Levels, got a job, settled down or started a family is worth it. To have the young people return smiling is what it’s all about.”