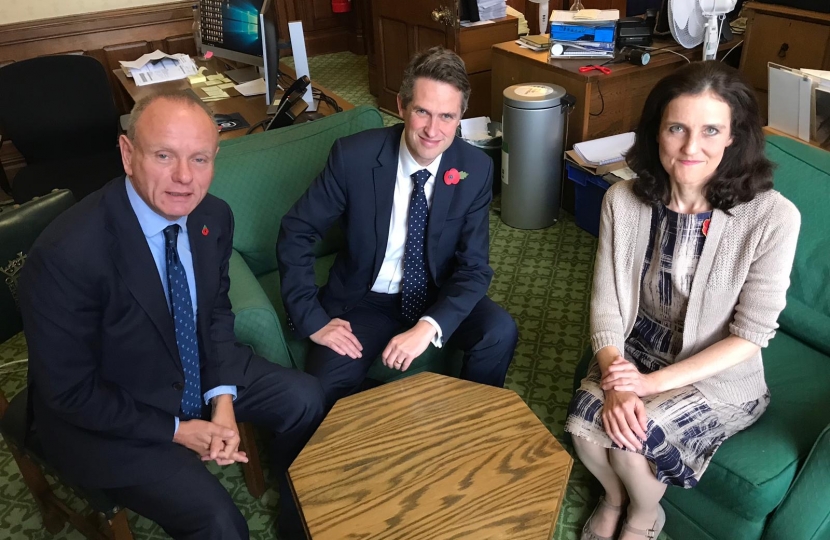 We have some of the best schools in the country in Barnet and I pay tribute to the all their staff for the excellent work they do. If am re-elected as MP, I will continue to campaign strongly for the best educational opportunities for children in Barnet.

Providing great schools and education for children and young people is an engine for social mobility. Great educational opportunities are essential if we are to give everyone the chance to get on and make a success of their life. Raising standards in education and improving schools is therefore a vital part of delivering social justice.

The Pupil Premium has seen £13 billion invested to support the most disadvantaged children; and there are 1.9 million, are now studying in good or outstanding schools, compared to 9 years ago when the Conservatives returned to office.

Under the last Labour government, England slipped down the international league tables in reading, maths, and science. That trend has been reversed as shown by international benchmarks. For example the Progress in International Reading Literacy Study (or PIRLS) shows that pupils in England are now outperforming their peers in many countries including Canada, Australia and the US.

One of the main reasons for this dramatic improvement is the emphasis the Conservatives have placed on the most effective methods of teaching children to read. Thanks to the hard work of teachers and the Government’s drive for phonics, the results of the phonics screening test introduced in 2012 have improved significantly. In 2012, just 58% of six year olds could read 32 words out of 40 correctly. By last year, that had risen to 82% in year one and 92% by year two.

Efforts are also being made to tackle grade inflation. In the Blair Brown years employer and university confidence in the school exam system eroded. The reforms made under this Government to GCSEs and A Levels to make these qualifications tougher and more rigorous. They are more stretching for students, ensuring they give young people a better grounding for further study or life in the workplace.

The attainment gap between children from disadvantaged backgrounds and other students has closed by 10% since 2010.

I’m worried that this important progress in supporting schools and improving education could be out a risk with Labour’s plans to close down the academies and free schools programme which has delivered great new schools in Barnet like Alma Primary and St Andrew the Apostle. Labour also want to abolish Ofsted which does vital work in raising school standards and ensuring parents have the information they need to know how their child’s school is performing.

Although there have been some big steps forward in improving education, I fully appreciate the concern felt about school funding. I have been fighting for more money for schools in Barnet. I will always campaign for the best educational opportunities for children in my constituency.

I am very much aware that schools are facing real pressure on their budgets because of rising costs. Over the last three years, I have been engaging with local schools and parents, listening to their views, and raising them at the highest levels of Government.

I have been making the case strongly to the Government for more money for Barnet schools. That includes raising this issue in face-to-face meetings with the Prime Minister (and his predecessor), with the Chancellor of the Exchequer, with the Chief Secretary to the Treasury, with three successive Education Secretaries, and with a number of Education Ministers.

The Government listened and in summer 2017 it announced additional funding for schools. Core school funding is now at its highest level on record, more than any other G7 country apart from the US. It was over £40 billion in 2016-17. That has risen to £43.5 billion for 2019-20. Spending on schools is approximately £2.6 billion higher in 2019-20 compared to 2017-18 and funding per pupil is being protected in real terms.

I have made the case for Barnet schools through questions and debates in Parliament, calling for funding to be increased in the forthcoming spending review.

During the Conservative leadership contest, I pressed Boris Johnson to make a commitment to providing more money for schools. So I very much welcomed the recent announcement by the Prime Minister of a substantial new funding package for education. Schools will receive more than £14 billion of extra funding over the next three years. This will raise the schools budget to £52.2bn in 2022/23. That means every pupil in every primary and secondary school in Barnet will get a real terms increase in funding. A number of Barnet schools will also see a significant uplift in their budgets as part of the process of levelling up support for schools which were previously under-funded.

The package announced by the PM includes over £700 million extra for children with Special Educational Needs and Disabilities (SEND) in 2020/21. This will be very important in our local area and it is an issue I raised in Parliament.

I fully understand the concern felt about our maintained nursery schools in Barnet because of the budget problems they have faced since the way early years funding is allocated was changed. I have been pressing the Chancellor of the Exchequer to save these schools.

The Chancellor acknowledged that pressure from me when he referred to it in his speech to Parliament on the 2019 Spending Round in which he announced an increase in funding for early years providers. I appreciate that this increase does not resolve the specific problems faced by Barnet’s maintained nurseries, but Mike Freer and I have managed to secure a promise from Education Secretary, Gavin Williamson, that he will find a solution to save these schools.

In conclusion, to give children in this country the best start in life we need excellent schools and great teaching. I will always back our brilliant local schools and will make the case strongly for them to have the resources they need to give local kids the chance to succeed in whatever path in life they choose.