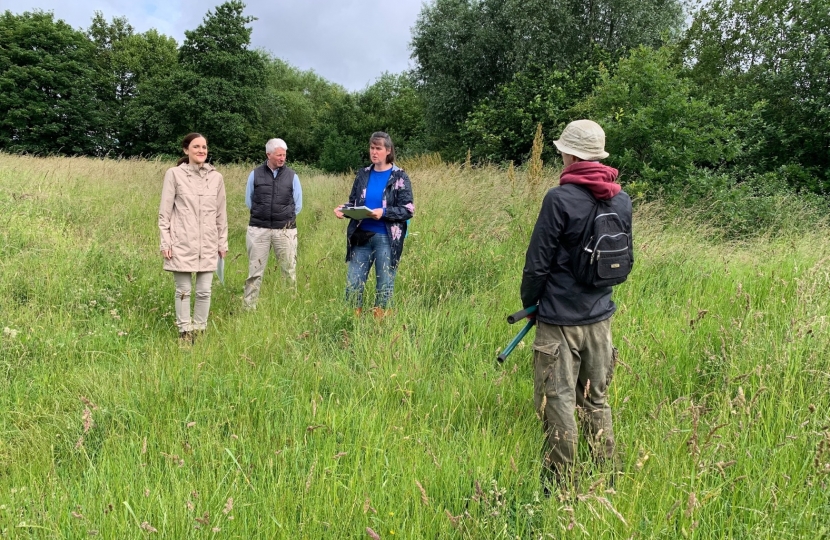 Welcome to my e-newsletter for June.

While it is disappointing that final Step 4 stage of re-opening has been postponed and holiday travel remains difficult, the success of the vaccination programme means there must be a good chance that we will see a further stage of unlocking on 19th July. The jabs programme is now open to all adults and over half the under 30s have had their first dose.

In Parliament this month, I appealed to Ministers to allow weddings and large gatherings to start up again. Following concerns raised by constituents, I also urged the Government to ensure people are allowed to visit their elderly relatives in hospital.

Now the Covid situation has improved so much, I have been able to resume my regular round of doorstep calls and I thank everyone who has taken time for a chat. Catalytic converter theft is an issue which has cropped up in several of these conversations. I have raised this with our local police, and also with the Policing Minister.

Planning and development also remain a grave concern on the doorstep. I will continue to fight against the Mayor of London’s proposals to build over station car parks, and against the attempt to add 1100 flats to the new housing planned for North London Business Park. I am engaging with residents to try to find an acceptable proposal for new housing Victoria Quarter, after the previous plan was rightly rejected by Barnet Council.

At Prime Minister’s Questions, I asked Boris to promise that new planning reforms would not restrict the right of residents to have their say over what is built in their neighbourhoods. I also published an article in the Telegraph online on why the Government must drop controversial aspects of the reforms expected to be included in a new Planning Bill in the autumn. You can read the article here or on my Facebook page at www.facebook.com/theresavillierscb.

I have continued my campaign for additional funding for maintained nursery schools in Barnet, with a question to Ministers on this in Parliament.

Along with two MP colleagues, I published an independent report on innovation, growth and regulatory reform which is on the Government’s website here. It sets out a range of ideas on how we can boost the growth industries of the future by using the freedom Brexit gives us to tailor our regulation to our domestic circumstances and respond more quickly to technological development.

Lastly I am happy to say that face-to-face meetings have resumed at my surgeries (although Zoom calls are also available for people for whom this is more convenient).

Inspirational visit to Covid mass vaccination centre
Chipping Barnet MP Theresa Villiers has called a visit to the StoneX Saracens stadium Vaccination Centre 'inspirational' as the Covid jab programme starts to protect younger adults. Theresa went to the centre with Hendon MP Matthew Offord to tour the site that can inoculate up to 1500 people a day. She arrived to find enthusiastic crowds of adults in their 20s and 30s queueing up to get the vaccine. Read more....

Villiers gets stuck into Dollis Valley litter-pick
Chipping Barnet MP Theresa Villiers recently joined the ‘Dollis Brookers’ volunteer litter pickers to help clear rubbish around Dollis Brook. She turned up with around 30 others for the event in glorious sunshine along the Dollis Valley Greenwalk on the last day of the Great British Spring Clean. Read more….

Villiers welcomes success in campaign for Durban IV boycott
A Government decision to boycott the UN’s Durban IV conference following concerns about antisemitism has been welcomed by Chipping Barnet MP Theresa Villiers. A long-time campaigner against antisemitism, Theresa had urged the Foreign Secretary to stay away from the event, raising this in the House of Commons and in a letter to Mr Raab. Read more....

Barnet MP backs ocean clean-up
Chipping Barnet MP Theresa Villiers has called on the Government not to delay implementing schemes to cut packaging and re-use bottles. Speaking in the World Oceans Day debate in Parliament, Theresa said the Government had done more than any of its predecessors to address the pollution tragedy in the marine environment. But the former Environment Secretary also warned there was still much more to do. Read more….

Call for action: Save Whalebones... again!
Theresa Villiers has appealed to constituents who want to save the fields at Whalebones in High Barnet to contact the planning inspectorate to express their opposition to the proposal to build 152 flats and houses there. After a five year campaign by Theresa and her constituents, the application to build at Whalebones was rejected by Barnet Council and the Mayor of London. But the developer, Hill Residential, has issued an appeal against that decision.

A public inquiry has been announced to help the planning inspector decide whether the fields should be built on. Read more…

Coppetts Wood conservation efforts praised by MP
Theresa Villiers has praised the group of volunteers who have been looking after Coppetts Wood. This provides a haven for nature right next to the North Circular Road. During the pandemic, visitor numbers shot up and a new team of Coppetts Wood Conservationists have been at work to protect and enhance the biodiversity on the site. Read more….

All Theresa’s surgeries are now appointment-only. Face-to-face meetings have resumed, but Zoom calls are also available as an alternative. The next surgery is on Sat 3rd July starting at 10.15am. Anyone wishing to see Theresa or her staff will need to make an appointment in advance. You will NOT be seen if you turn up without a pre-booked appointment. Bookings can be made using the contact details set out above.

The waiting room which is normally available during surgeries will be closed. Constituents will need to arrive at the time of their appointment and may be asked to queue outside if they are early, or if there are delays to the appointment schedule. We apologise for this inconvenience, but it is necessary to comply with Covid guidance and minimise the number of people in the constituency office at one time.