Call for action: Save Whalebones... again! 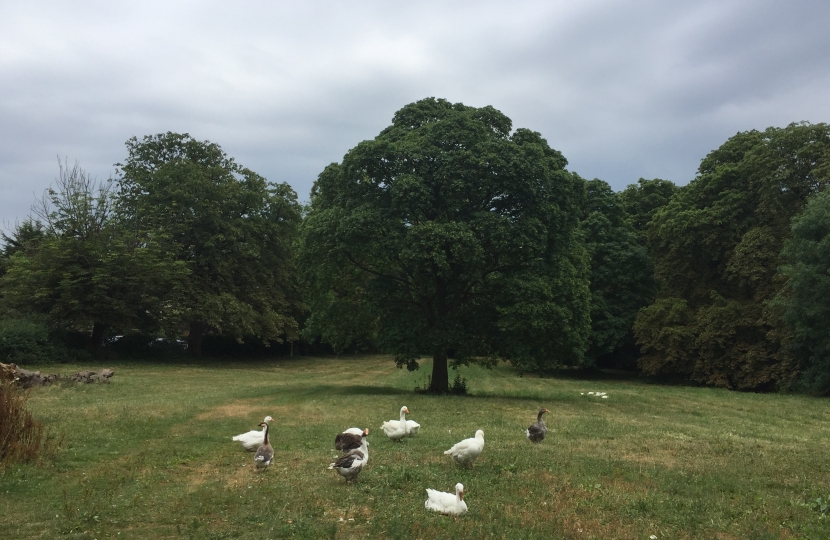 Theresa Villiers is asking all constituents who want to save the fields at Whalebones in High Barnet to contact the planning inspectorate to express their opposition to the proposal to build 152 flats and houses there.

After a five year campaign by Theresa and her constituents, the application to build at Whalebones was rejected by Barnet Council and the Mayor of London. But the developer, Hill Residential, has issued an appeal against that decision.

A public inquiry has been announced to help the planning inspector decide whether the fields should be built on.

Everyone now has the opportunity to have their say. The deadline is Friday 18 June! Time is running out to save Whalebones! This article sets out how you can send in your views and make sure your voice is heard:

You need to include your name, your postal address, and the appeal reference number APP/N5090/W/21/3273189. You should state whether you are for or against the appeal. If you wish to speak at the inquiry, you should include that request in your response.

To have the most impact, objections need to provide reasons which are recognised as valid in planning law. As well as setting out your individual views and any concerns you are especially worried about, Theresa is encouraging people to include some of the following points:

Remember, the deadline for sending your views to the public inquiry is 18th June. Please send your objections to the planning inspector TODAY!

Further reasons why Whalebones should be protected are set out in Theresa’s most recent representations to the planning inspectorate, copied below. You may find some of these details useful in writing your own letter to the public inquiry.

Representations made by Theresa Villiers MP to the planning inspectorate for consideration at the Whalebones public inquiry: appeal reference APP/N5090/W/21/3273189

I remain firmly opposed to the development at Whalebones.

Whalebones has left us some of the very last agricultural fields in the London suburbs. As a local landmark, they are rightly protected by the Wood Street Conservation Area. Over 800 people objected to the proposals to build on the fields and Barnet Council’s decision to refuse this planning application was backed by the Mayor of London.

A fundamental aspect of Barnet’s Local Plan is that development should be in keeping with the character of the surrounding neighbourhood.

Policy CS5 seeks to ensure that all development in Barnet respects the local context and distinctive local character and improves the quality of landscaping and in turn enhance the experience of Barnet residents.

The character of the land under consideration in this planning appeal is agricultural. Constructing over 150 new dwellings on these green fields is wholly inconsistent with the character of agricultural land and the leafy, open nature of Whalebones.

But these would be lost if this appeal is allowed. As pointed out by Historic England, “…development across the site would collectively represent a visible urban hardening to this western part of the conservation area.”

They conclude that the prominence of the land’s open natural landscaped character and views out into Dollis Valley would be reduced, harming the character and appearance of the conservation area.

Barnet Council’s conservation officer has commented that the proposed development would have a significant impact on the established character and appearance and would erode the site’s openness and rural character which distinguishes the site and is evident in views from the public realm.

The scale, massing, and density of the plans (which include four storey blocks of flats) and are inconsistent with the rest of the conservation area which is predominantly one and two storey buildings. The development would be visually overbearing, especially for Elmbank residents in Collison Avenue, some of whom are only 4 metres from the new blocks. An almost continuous wall of three and four storey blocks will loom over Elmbank if the appeal is successful.

On page 158 of the report by Barnet Council’s officers to the planning committee, they accept that views protected by the conservation area will be harmed by the development. They were wrong to disregard this on the grounds that this is private land and not accessible by the wider public.

Protection of green spaces is a fundamental strand of Barnet and London planning policy. The fact that there isn’t currently public access does not mean the fields are any less worthy of protection. Planning protection for the green belt, Metropolitan Open Land and other open space is about much more than public access.

The developers seek to argue that their proposals for public access to the limited area which they do not ask to build over, somehow justifies concreting over the rest of the fields. But accepting that argument would mean it becomes commonplace to build over precious habitats just because other parts of a particular site were to be retained and opened to the public.

That would set a very damaging precedent which could significantly undermine green belt and other protections of fields and open spaces.

The application would see the loss of wildlife habitats which make an important contribution to local biodiversity.

The site and neighbouring Whalebones Park currently supports bats, badgers, and muntjac deer. Birdlife includes species on the Red List such as Grey Wagtails. Local residents tell me that the fields are a feeding ground for a colony of swifts.

Barnet Local Plan policy DM16 states that where the council is considering development, it will seek retention, enhancement or creation of biodiversity.

Concreting over a significant part of the fields would have the opposite effect. Moreover, this green field development would hinder the achievement of the goals recently announced by the Government on meeting a new a legally binding target for nature conservation and species recovery:

This important reform has been described by the Environment Secretary as a “net zero for nature”. In the press released accompanying the official announcement, the chief executive of Natural England, Tony Juniper specifically referred to housing development as an area of policy that will be affected by this new target, saying:

“A new target for Nature recovery enshrined in law will be a powerful new driver for coordinated action, as was found on cutting greenhouse gas emissions following the passage of the Climate Change Act. Meeting a stretching Nature target can be done, so long as we can join up different policy areas, such as farming, housing development and infrastructure, while also improving overall environmental quality in terms of air and water pollution.”

In an era where it is becoming ever more apparent that we must act to prevent the disastrous loss of habitats after a record decline in biodiversity, this is not the time to build over precious fields which have survived London’s expansion for so long.

The PTAL rating of the site is poor. The distance from local shops and the tube station inevitably means this would be a highly car-dependent development and this would intensify traffic problems which already exist in Barnet Road and Wood Street.

The data in the officers’ report for the Barnet planning committee on car journeys generated just doesn’t reflect the reality which those of us who live in the area and drive along that road every day. The assertion that this could be dealt with by improved pedestrian and road safety measures is wholly inadequate.

The location has only recently absorbed an increase in population with the construction of Elmbank and local facilities such as GP surgeries are already over-subscribed.

In summary, if allowed the plans would amount to a serious breach of conservation area policy which was put in place to protect a location of significant historical and environmental importance.

The scale, massing and density of the plans are inappropriate for a site of this sensitivity and amount to an overdevelopment. Building over these fields would also contravene planning policy on protecting biodiversity as well as making it harder to meet legally binding targets due to be set soon on nature recovery and conservation.

The Whalebones site provides a green lung which helps to fight pollution and the loss of trees and open space will hamper efforts to improve local air quality.

I would be grateful if my further comments could taken into account by the Inspector. I would also like the opportunity to give evidence at the public inquiry and look forward to receiving details in due course.