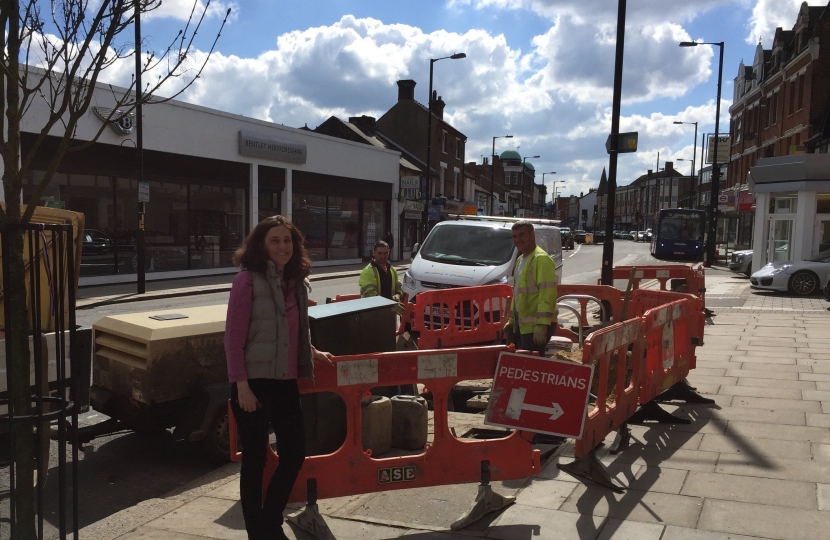 Theresa Villiers was contacted by local residents in 2014 concerned about slow broadband speeds in parts of her constituency. While most homes and businesses can access superfast broadband speeds in Barnet, certain areas had been left with older, slower connections. A long campaign followed. Now the gaps in BT’s provision of fast broadband in High Barnet and Underhill are steadily being filled; and Virgin is expanding its ultrafast network to 40,000 homes in the borough, including many in High Barnet and Friern Barnet.

Theresa continues to engage with both Openreach and Virgin on improving broadband speeds in Barnet. She is also keeping up the pressure on Virgin to ensure they operate in a considerate way when installing cable and minimise road and pavement closures.

Back in 2014, Theresa began by lobbying BT to fill the gaps in faster broadband provision in High Barnet, Underhill and Totteridge. After taking the case to the Government and the Mayor of London and setting up meetings between BT and local residents groups such as the Barnet Society and Fibre4Barnet, a major victory took place in September 2015.  BT confirmed that High Barnet and Underhill would be part of their next round of fibre broadband delivery, and that 6 of the 9 telecoms cabinets identified by the Barnet Society as urgently needing a connection to fast fibre broadband would be upgraded.

Leaving no stone unturned, in January 2016 Theresa set up a meeting with Virgin Media to encourage them to include Barnet in their £3bn ‘Project Lightning’ expansion of their ultrafast fibre broadband network. Representatives from the Barnet Society and Fibre4Barnet also attended, to put the case to Virgin and to encourage local residents to register their interest with the company. In July 2016, Virgin confirmed that 40,000 homes in Barnet would be included in the programme and would have access to ultrafast broadband by the end of 2018. Work on Project Lightning started in Barnet in February 2017.

January 2019: Villiers keeps up campaign for better broadband for Barnet

July 2016: Lightning strikes in Barnet: 40,000 premises to get ultrafast boost from Virgin media

September 2015: 98% to get access to fast fibre broadband in Chipping Barnet

July 2015: Get involved in the campaign for faster broadband in Barnet

Sept 2014: Villiers meets BT to press for more action on broadband in Barnet

October 2013: Villiers urges BT to get Barnet households back online