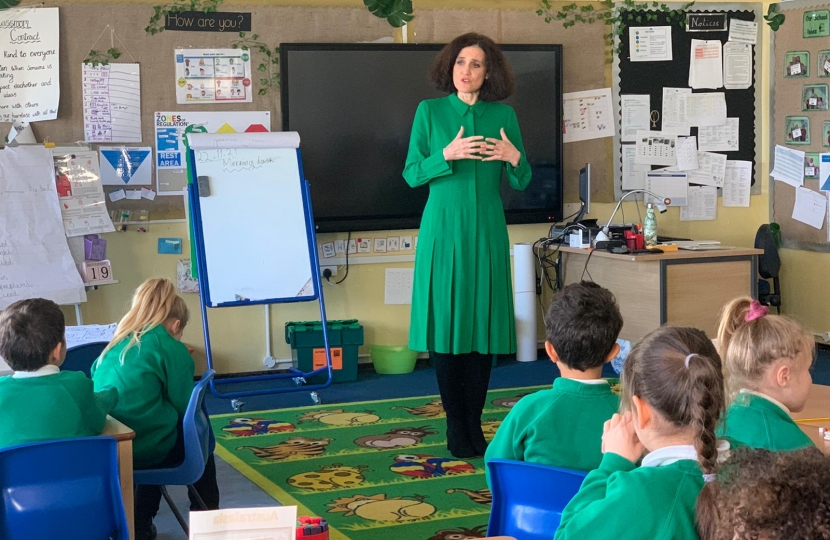 Welcome to my November 2021 e-newsletter. This reaches you at a time when the new Omicron variant of Covid has caused great uncertainty. It demonstrates the need for continuing caution, but Ministers are clear that they will only keep restrictions in place for as long as needed. In Parliament yesterday, I appealed to the Health Secretary not to shut down the hospitality sector again just when it is getting back on its feet. Thankfully there is no current indication of the need for another lockdown.

Earlier this month I attended the COP26 summit as part of the UK Parliamentary delegation and I welcome the positive outcome secured by conference chair, Alok Sharma, and his colleagues in Government. There is still a huge amount of work to be done, but the Glasgow Pact agreed by 197 countries at COP26 marks important progress towards removing coal from power generation. Agreements on reducing methane emissions and ending deforestation are also ground-breaking.

Parliament was honoured to welcome men and women from the armed forces who served in Operation Pitting to evacuate 15,000 people from Afghanistan after the Taliban take-over. They paraded into the Parliamentary Estate to be greeted by the Speaker and Prime Minister who expressed gratitude on behalf of all Parliamentarians.

As I have done for many years, I laid a wreath at the Chipping Barnet war memorial on Remembrance Sunday. Another regular November event is Mitzvah Day when the Jewish community promote volunteering and community activity. I helped the 20th Finchley Scouts with their Mitzvah Day project to plant crocus bulbs in the grounds of the Betty and Asher Loftus care home in Colney Hatch Lane.

I was successful in the ballot for a question to the Prime Minister and highlighted the crucial importance of supporting Barnet Hospital and the whole the NHS as it faces a difficult winter.

Other issues I have raised in Parliament over recent weeks include support for unpaid carers and the community groups who assist them; the Health and Social Care Bill on improving integration between the NHS and the care system; safeguarding the competitiveness of high energy industries; putting more burglars behind bars; and funding for Barnet schools. I met the Chancellor, Rishi Sunak, the new Education Secretary, Nadhim Zahawi, and the Early Years Minister, Will Quince, to make the case for more funding for Barnet schools, especially our maintained nursery schools.

I would like to thank everyone who came along to my rally at City Hall to save our suburban station car parks. I am also happy to pass on the news that the Planning Inspector looking at the Whalebones development has upheld Barnet Council’s decision to refuse planning permission. This is an important win.

PS If you haven’t signed my online petition to save Barnet Police Station yet, and I hope you will click here to express your support!

MP speaks up for Barnet Hospital in PMQs
Theresa Villiers called for action to support Barnet Hospital as we enter the busy winter period for the NHS, after being drawn in the ballot to ask the Prime Minister a question in Parliament.  Following up on concerns raised with her when she visited our local hospital in October, Theresa told MPs that Barnet Hospital staff had told her that they were routinely seeing record numbers of people in A&E. Read more…

Barnet MP joins Parliamentary delegation to COP26
Following attendance at the COP26 conference, Chipping Barnet MP Theresa Villiers has been reflecting on the outcome of the summit. Speaking after news broke that the Glasgow Pact on tackling climate change had been signed 197 countries, Theresa Villiers said: “The COP26 conference has delivered a real step forward in the fight against dangerous climate change.” Read more….

Villiers leads rally at City Hall to save suburban station car parks
Campaigners from Barnet, Enfield and Harrow came together outside City Hall to call on the Mayor to save station car parks. Theresa Villiers organised the rally to coincide with last Mayor’s Question Time to take place before the Greater London Assembly moves to a new location. Read more…

Villiers calls for rethink on TfL's 17 week Bank branch shutdown
Chipping Barnet MP Theresa Villiers is seeking an urgent meeting with TfL about its plan to close a key part of the Northern Line’s Bank branch for more than four months next year. Read more…

Victory in the latest round of the long battle to #SaveWhalebones!
MP Theresa Villiers and the Barnet Society have won the latest planning battle with developer Hill Residential over its proposals to build on the fields at Whalebones. Theresa and the society joined forces in a virtual public inquiry and persuaded the Planning Inspectorate to uphold previous decisions by Barnet Council and the London Mayor. Read more…

Chanukah Sameach from Theresa Villiers!
“I would like to wish Chanukah Sameach to the Jewish community in my constituency in Barnet. I very much hope you all have the opportunity to spend time with family and friends over this period of celebration.”

Happy Diwali 2021 from Theresa Villiers MP
“I would like to wish you all a Happy Diwali! This is one of the most important and joyous festivals of the year for millions of Hindus, Sikhs and Jains in Britain, in India and around the world.”

Theresa’s next diarised surgery takes place from 1030 to 1200 at her constituency office at 163 High Street. Constituents wishing to see Theresa or her staff will need to make an appointment in advance. You will NOT be seen if you turn up without a pre-booked appointment. Bookings for face-to-face meetings or Zoom calls can be made using the contact details set out in the preceding paragraph.