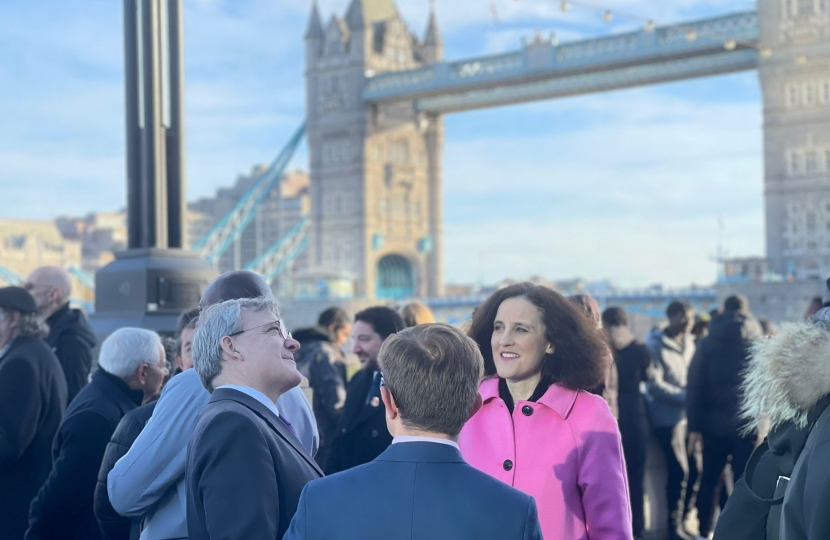 Theresa Villiers, MP for Chipping Barnet, stepped up her campaign to save station car parks from being built over by the Mayor of London. She brought campaigners from the boroughs of Barnet, Enfield and Harrow to gather outside City Hall for the last Mayor’s Question Time to take place before the Greater London Assembly moves to a new location.

On this sunny autumn morning, GLA members including Susan Hall, Shaun Bailey, Tony Devenish, Keith Prince and Andrew Boff came out to meet the group of around 50 people to hear their concerns and express support.

Petitions with a combined total of over 20,000 signatures were handed in to the Mayor’s office; and in Question Time, Susan Hall AM challenged the Mayor to scrap his deeply unpopular proposals to close car parks.

Speaking at the rally, Theresa Villiers said, “We’re here to Save Our Suburbs! The proposals by TfL and the Mayor of London to build blocks of flats over tube station car parks in Barnet, and other suburban areas, are unacceptable.”

“They will mean many women returning home late from work will face real security concerns waiting at bus stops at night or trying to find a taxi. Disabled people will be hard hit too because they are more dependent on their car transport than others for whom walking or cycling could be an option. And commuters living outside walking distance of their local station will be left struggling to get to work.”

“Station car parks in the suburbs, especially towards the end of tube lines, perform an important park-and-ride function. They help people get on the public transport network. These car parks actually keep cars off the road. It makes no sense to close them. The Mayor’s attempt to do this shows that he does not understand the suburbs and he does not care about outer London.”

“It is also deeply worrying that many of the blocks proposed for these car park building projects are high rise and wholly out of place in a low rise outer-suburban environment. Allowing these tower blocks to be built would be flatly inconsistent with decades long approach to planning rules in suburban areas.”

Ms Villiers vowed to continue to fight to save the station car park under threat in her constituency High Barnet, as well as Arnos Grove and Cockfosters which are just over the borough boundary but are used by many of her constituents. Other station car parks targeted by the Mayor for closure include Arnos Grove, Blackhorse Road, Canons Park, Harrow, Colindale, Finchley Central, Hounslow West, Northwood, Rayners Lane, Stanmore, and Wembley Park. In some cases, tower blocks of 20 storeys have been proposed.