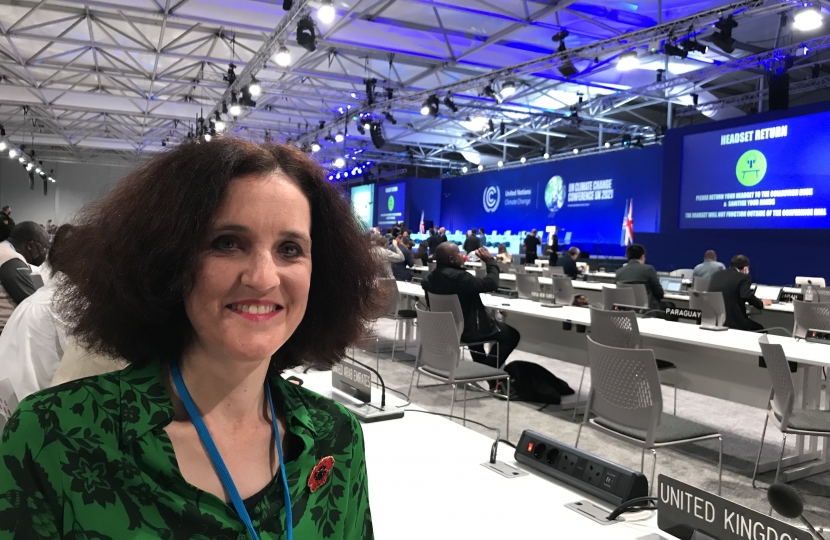 Following attendance at the COP26 conference, Chipping Barnet MP Theresa Villiers has been reflecting on the outcome of the summit. Speaking after news broke that the Glasgow Pact on tackling climate change had been signed 197 countries, Theresa Villiers said:

“The COP26 conference has delivered a real step forward in the fight against dangerous climate change. Some of the biggest emitters in the world have signed up for the first time to phasing down the use of coal for energy generation. We also saw a breakthrough agreement to limit methane emissions which could make a real difference to keeping down global temperature rises.”

“Whilst there is a long and difficult road ahead, the Glasgow Pact has been very positively received around the world. It genuinely keeps alive the possibility of limiting global temperature rises to 1.5 degrees. The chair of the conference, Alok Sharma, and his colleagues in Government, deserve credit and praise for what they have achieved.”

“A crucial element of the agreement is that countries have promised to be back at another COP summit next year to set out further commitments and progress on reducing harmful emissions.”

“I attended a number of sessions at the Glasgow conference on nature based solutions which help keep carbon locked in the ground and in trees an plants. One of the most heartening aspects of COP26 is that conservation of nature and biodiversity has been given greater importance than any other past COP. Nearly 200 countries have committed to ending deforestation including Brazil with its crucial responsibilities for the rainforest.”

Theresa Villiers attended COP26 on “Nature Day” on 6th November. She was interviewed on BBC Radio Four's Today Programme yesterday as part of a panel reflecting on the final hours of this crucial summit.