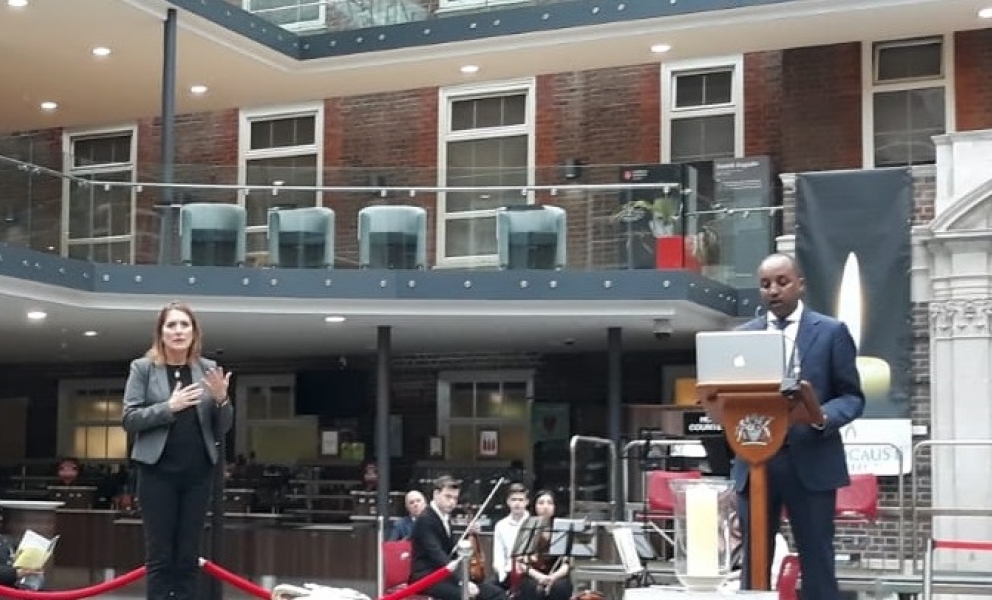 We must never forget the horrors of the Holocaust 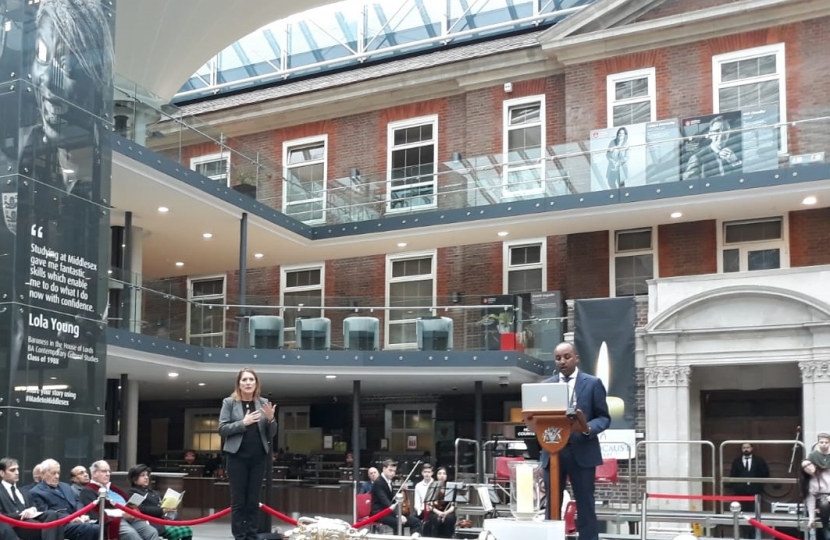 Speaking after the commemoration, which took place in the Ricketts Quadrangle of Middlesex University in Hendon, Ms Villiers said: “I have been attending this event for many years and I always find it deeply moving.”

“Holocaust Memorial Day provides an annual reminder of the appalling consequences that antisemitism and racism can lead to. Barnet Council’s commemoration ceremony was an important opportunity to remember the victims of the Holocaust, pay tribute to survivors, and once again pledge to oppose all forms of antisemitism and racism.”

“It was heartening to see students from East Barnet School, Chloe Blott and Greg Wishaw, read out a Statement of Commitment to promote education on the Holocaust to ensure the lessons learned from the evil that occurred are never forgotten.”

“An eloquent speech from a representative of the Rwandan High Commission also gave us the chance to reflect on people who have suffered as a result of more recent genocidal atrocities.”

Theresa was one of a cross-party group of MPs to sponsor a debate in Parliament on Thursday to mark Holocaust Memorial Day and this is the speech she gave:

“No other episode in human history can match the holocaust for scale and depth of evil—an evil that sought to harness the technology of the modern world to deliver mass murder on an industrial scale, in an attempt to eliminate an entire ethnic group. The fact that it could have happened not in the distant past but in supposedly civilised 20th-century Europe still shocks me, and I still find it impossible to comprehend, so many years after I first learned the story of those terrible events. That so many people stood by when their Jewish friends and neighbours were torn from their homes and subjected to unspeakable cruelty is the most truly shocking part of that story.

However, I think we should also remember those who did not look away when Jewish people and others were being attacked and rounded up by the Nazis: the people who stepped up and saved lives, even when that put their own life and those of their families in real danger. The example that I want us to remember today is Albania.

Following the German occupation, the Albanian population, in an extraordinary act of courage, refused to comply with Nazi orders to hand over a list of Jewish people living in their country. Albanian Government agencies provided many Jewish families with fake documentation to enable them to hide in the wider population. That remarkable assistance was grounded in Besa, a code whereby it was considered a matter of national honour to help Jewish people in their time of trouble. Sanctuary was offered not only to Albanian Jewish people, but to refugees from other countries. Albania, the only country in Europe with a Muslim majority, succeeded where others failed, and at the end of the war its Jewish population was larger than it had been at the start.

As well as producing stories of horror, brutality and pain, the events that we are considering today gave rise to the heroism of ordinary people in Albania, as well as people such as Frank Foley and Nicholas Winton, the voluntary groups and church groups who made the Kindertransport possible, and so many others who gave sanctuary and shelter to Jewish people fleeing Nazi atrocity.

Let me, like other Members, pay a heartfelt tribute to holocaust survivors in my constituency. There may be others, but those of whom I am aware include Hedi Argent, Harry Jacobi, Freddie Knoller and Mala Tribich. It is incredibly brave of survivors to be prepared to come forward and tell their stories—to relive those terrible years of suffering. We owe them so much for their role in explaining to successive generations the evil to which humanity can sink, and the importance of doing everything we can to make sure that this never, ever happens again. Like others, I thank the Holocaust Educational Trust, the Holocaust Memorial Day Trust and the Government for their financial support for holocaust education.

I have been campaigning against antisemitism for about 30 years. More or less the first time I set foot across the threshold of this building was to lobby my MP to highlight the plight of Jewish refuseniks in the Soviet Union, who were unable to practice their faith in freedom. I am sure you, Madam Deputy Speaker, will remember the debate in April on antisemitism; it was one of the most moving debates I have ever been present for in this place. It was a chilling reminder that the menace of antisemitism is still with us. It is truly shocking that the hon. Member for Streatham (Chuka Umunna) has stated that the problem with antisemitism in Labour is now so severe that the party has passed the threshold for being deemed to be institutionally racist. As colleagues have pointed out, this is a problem on many parts of the political spectrum, and it is completely unacceptable.

Antisemitism has mutated, taken on new forms, and gained a lethal new lease of life with social media. It has also been given new life by the militant anti-Zionism of the radical left, so today is a time for all of us to make a commitment once again to root out antisemitism wherever it emerges, and to say loud and clear that we will never, ever tolerate this vicious form of racism.”