Villiers stands up for the highest standards of animal welfare 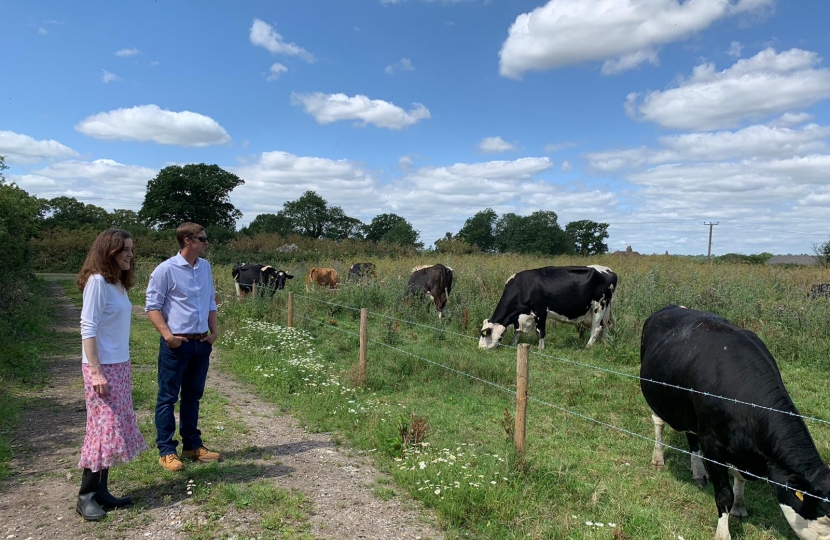 Theresa Villiers MP repeated her commitment to maintaining our high standards of safety, animal welfare and environmental protection in food production in her final speech in Parliament before the summer recess. A long time campaigner for improving animal welfare, Theresa made the case strongly during her time as Environment Secretary that the UK should not reduce restrictions or tariffs on food imports unless they comply with standards which are equivalent to those we expect our own farmers to comply with.

In the debate this week in Parliament on new laws on trade, Theresa Villiers was one of 11 Conservative MPs to defy the Government whip and support Jonathan Djanogly's amendment, NC4. This would have introduced stronger Parliamentary scrutiny of trade negotiations.

In her speech to MPs, the former Environment Secretary said: "I support this Bill because I believe that removing unnecessary barriers to trade can boost jobs and growth. But I hope the Government will consider seriously whether amendments can be made to strengthen parliamentary oversight.

I was one of 18 Conservative MPs to back New Clause two of the Agriculture Bill. I did so because I believe our trade policy should be consistent with our values.

This Government was elected on a manifesto with stronger commitments on the environment and animal welfare than any of our predecessors.

But maintaining and our domestic rules on animal welfare and environmental stewardship of land will have less and less of a real world impact if more and more of our food is imported from countries with lower standards and fewer qualms about such matters than we do.

So I’d like to hear the Minister confirm this evening that this Government will keep import ban on chicken washed in disinfectant on the statute book.

And I hope he’ll say the same of the ban on beef from cattle whose growth has been artificially boosted by hormones…. many of whom are intensively reared on feedlots containing thousands of animals, fed off soy production contributing to deforestation in the Amazon basin.

More or less every country in the world reflects sensitivities over food in their approach to trade policy, for the good reason that food security is crucial for any society.

I warmly thank the Trade Secretary for agreeing to establish of a Commission to consider how we securing the economic advantages of free trade agreements, without undermining our world class food standards.

Those standards would be undermined if we allow an unrestricted tariff-free influx of food produced using methods which would be illegal here.

A good deal with the US, a mutually beneficial deal, could see tariffs coming down, even in sensitive sectors like beef, so long as the incoming food complies with animal welfare and environmental standards which are equivalent to our own.

Many US producers are perfectly capable of doing that… and it should not be beyond the wit on man to come up with a certification system.

Contrary to what some have claimed, this is not a re-run of the great debates on the Corn Laws and it is a caricature to suggest that those of us raising concerns have been captured by producer interests as our Victorian forbears once were.

All I’m asking is that we don’t sell ourselves short in this country. The UK is the third biggest market for groceries in the world. Even conditional access to our market is a hugely valuable prize.

Just because we would like a trade deal with the US does not mean we have to give them everything that they want. There is so much that we can offer our trading partners in the US, and other countries. Is it so unreasonable to say that, when it comes to food, there are limits to liberalisation?".

NC4 was not carried and the Trade Bill now goes on to be considered in the House of Lords without changes having been made to it.

Theresa Villiers has issued the following statement in response to constituents getting in touch about the recent vote in Parliament on school meals: