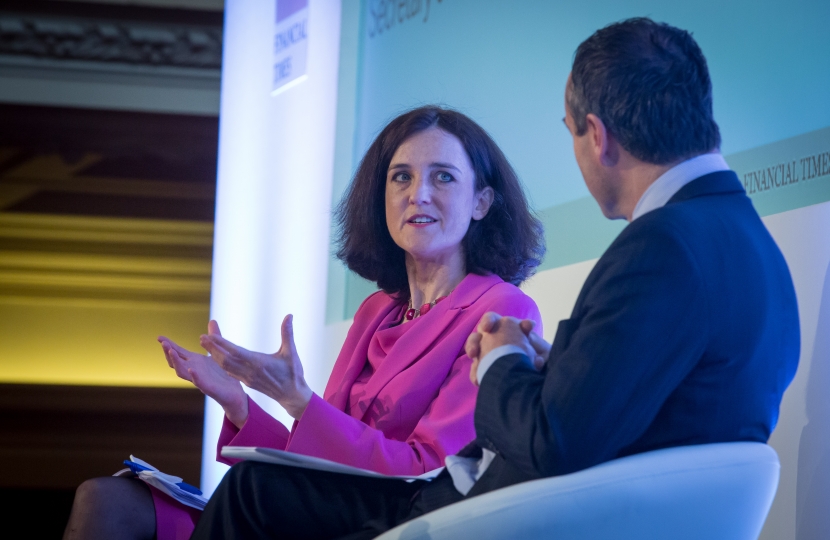 Responding to constituents who have been in touch about the UK Internal Market Bill, Theresa Villiers has published the following statement:

"I am backing the UK Internal Market Bill which is being debated in Parliament this evening. This draft legislation has two functions. Firstly, it provides a legal framework for a UK internal market, replacing powers previously exercised by the EU. Secondly, it creates the power for Ministers to correct some harmful effects of the Northern Ireland Protocol just in case current negotiations do not deliver an agreement with the EU on resolving these matters.

The UK’s internal market has functioned effectively for centuries. The unfettered circulation of goods is an important element of the foundation laws of our Union.

The UK Internal Market Bill will grant additional powers to the devolved administrations, following repatriation from Brussels. The restoration of democratic control over these rules is one of the benefits delivered by the UK’s departure from the EU. The Bill will ensure businesses can continue to trade across our country as they do now, avoiding new burdens and barriers in order to protect jobs and support our recovery from the Covid recession.

This is achieved via the principle of ‘mutual recognition’ meaning that goods which are compliant for sale in one part of the country can also be sold in other areas, even if different devolved rules apply locally.

The Bill also puts in place reasonable steps to create a safety net that ensures the Government can deliver on its manifesto commitment that NI businesses can continue to enjoy unfettered access to the rest of the UK. Together with further legislation expected to be introduced shortly, these clauses would give UK Ministers the power to determine the arrangements which would operate under the Protocol in relation to goods passing between Northern Ireland and Great Britain.

With the end of the transition period fast approaching, there are no guarantees that the UK/EU Joint Committee – set up under the treaty to iron out inconsistencies in the terms of the Protocol – will reach agreement on all outstanding issues before the clock runs down.

The Northern Ireland Protocol was the product of compromise, and as a result there are provisions which cut across one another, but there is one consistent thread: that both parties recognise the overarching importance of the Belfast/Good Friday Agreement.

But there are other provisions of the Protocol which seem to take a different approach. Despite Article 4 upholding Northern Ireland’s place in the UK customs territory, unless a reasonable decision is made in the Joint Committee, provisions in Article 5 will come into operation. These would have the result that all goods moved from Great Britain to Northern Ireland will be assumed to be at risk of re-export to the EU. That would make them liable to pay full EU tariffs and there would have to be what effectively amounts to a full customs border between Great Britain and Northern Ireland.

So the default under Article 5 – which will be the automatic result if the EU ‘sit on their hands’ – would undermine Article 4, and set up unjustified barriers between Northern Ireland and the rest of the United Kingdom.

Separating Northern Ireland and Great Britain in this way cannot have been intended in a treaty which includes Articles 1, 4 and 6 referred to above. It would amount to changing the constitutional status of Northern Ireland within the UK and would thus be inconsistent with a core principle of the Belfast Agreement.

When the Government signed the Protocol they hoped – and still hope – that these contradictions would be resolved in the Joint Committee. They were willing to sign on the basis that the EU would act in good faith to seek to agree sensible arrangements to operate the Protocol, including the rules applying to goods moving from Great Britain to Northern Ireland.

However, that hope now has to be tempered with the reality that the Joint Committee may not reach agreement – in which case (unless we take action) we would be powerless to stop these damaging defaults kicking in. With just a few months to go before the end of the transition period on 31st December, the Government needs to plan for that eventuality.

This has been made more urgent by the threat the European Commission has made to refuse to list the UK as a fit country to export food to the EU, despite the fact that we have transferred the full body of EU law on to our domestic statute book, including in relation to food safety and standards. If the EU stick to this position, and they also demand what is effectively a full operating border between GB and NI, that would mean transporting food from GB to NI would become unlawful. That cannot possibly be acceptable.

I would also like to emphasise that none of the clauses in the Bill would undermine respect for the rule of law. It is not novel or unprecedented for Parliament, or indeed other like-minded governments, to consider legislation that has the potential to override treaty obligations.

For example, the Communications Bill was put forward by the Labour Government in 2002, despite Ministers acknowledging that it could violate Article 10 of the European Convention on Human Rights. Moreover the EU, itself, has sometimes disregarded adverse rulings by the WTO (for example in relation to Airbus and in the EU/US steel and aluminium dispute) which arguably put them in breach of commitments in treaties they have signed.

Whether, and how, to implement our treaty obligations is for Parliament, and Parliament alone. This is a conclusion backed up by the principle of parliamentary supremacy – the key principle of our constitution – and the UK’s ‘dualist’ system which separates domestic and international law.

This principle was upheld unanimously by the Supreme Court in the Gina Miller case in 2017, and was expressly confirmed in Section 38 of the EU Withdrawal Agreement Act 2020."