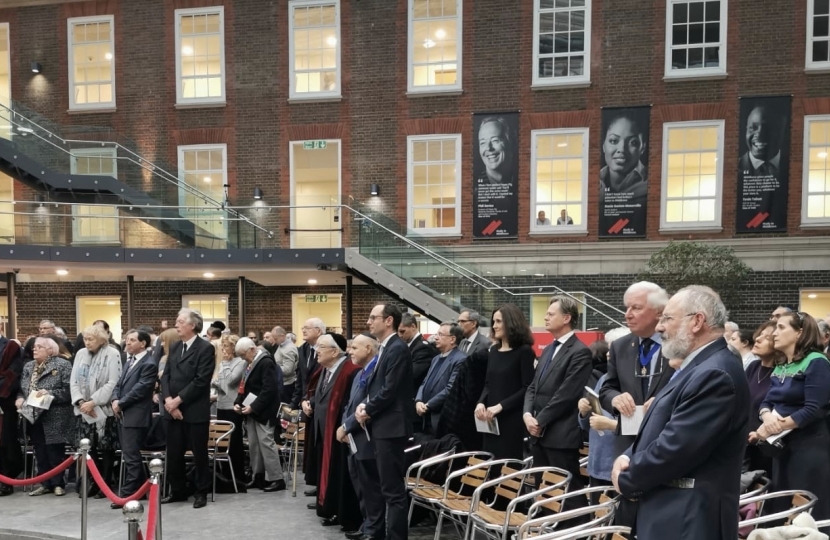 Chipping Barnet MP Theresa Villiers has taken part in two Holocaust Memorial Day events and warned the world must redouble its efforts to remember the atrocity as fewer and fewer eye witnesses remain.

Theresa attended Barnet Council's commemoration at Middlesex University on Sunday for the 15th year in succession where she heard the moving story of Holocaust survivor Ivan Shaw. The 400 or so people present also heard from Tatjana Goldberg about her experiences during the Bosnian war. A number of other speakers, including the Mayor of Barnet, Cllr Caroline Stock, reflected on the impact of the Shoa on their relatives.

Earlier in the week, Theresa took part in the Home Office and Department for Environment, Food & Rural Affairs Holocaust Memorial event in Whitehall, alongside the Home Secretary, Priti Patel.

The audience heard a powerful speech from survivor, Manfred Goldberg, on the horrific suffering inflicted during the systematic attempts by the Nazis to exterminate Jewish people, and other minorities, during the Second World War.

At that gathering, the Environment Secretary said in a speech: “I want to pay a heartfelt tribute to Holocaust survivors who live in my Chipping Barnet constituency.

“Holocaust Memorial Day is a time to remember the appalling depths of cruelty to which humanity can sink, and to pledge that we will stand together to make sure nothing like this ever happens again.

“As fewer and fewer eye witnesses remain with us, we must redouble our efforts to ensure that the events of the Holocaust are never forgotten.

“No other episode in human history can match the Holocaust in the depth of the evil that sought to harness the technology of the modern world to deliver mass murder on an industrial scale.”

Speaking afterwards she added: “This year's theme for Holocaust Memorial Day on the 75th anniversary of the liberation of Auschwitz-Birkenau concentration camp is Stand Together. We must all stand together against antisemitism and racism."