MP calls for action to protect the ocean 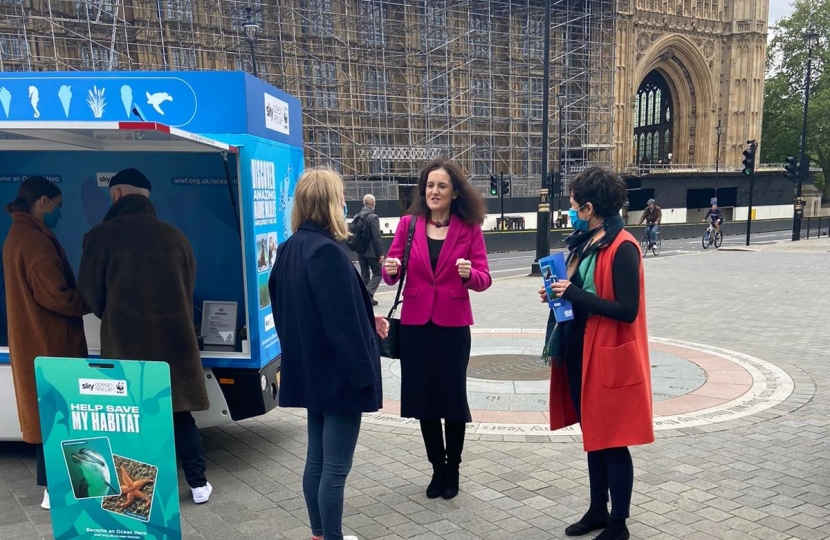 Theresa Villiers, MP for Chipping Barnet has met representatives of WWF and Sky Ocean Rescue to discuss their campaign to restore and revive our oceans and marine life.

Theresa is a strong supporter of action to tackle plastics pollution in the sea and other measures to safeguard the marine environment. WWF and Sky have been working together on these issues for some years and came to Westminster to talk to MPs in advance of a debate on ocean recovery which will take place in June.

After the meeting, Theresa issued the following statement: “2021 is a vital year for the ocean. Through our COP26 and G7 Presidencies, the UK needs to show global leadership in tackling the pressures on the ocean. We must advocate for greater action and global cooperation.

The protection, restoration and management of the marine environment is central to objectives in the Government’s 25 Year Environment Plan, and 38 per cent of UK waters are now in Marine Protected Areas.

At the recent One Planet Summit, the UK accepted the position of Ocean Co-Chair of the High Ambition Coalition for Nature and People. Between this and the UK-led Global Ocean Alliance, there are now over 60 countries supporting a target to protect at least 30 per cent of the global ocean by 2030.

I strongly support this #30by30 campaign, but we need to go further. I am urging Ministers to push for an ambitious global biodiversity framework to be adopted at the 15th Conference of Parties of the UN Convention on Biological Diversity which will take place in China later this year.

The Government is driving forward ambitious action to reduce plastic pollution in the ocean through the Commonwealth Clean Ocean Alliance, a growing group of 34 Commonwealth member states. £70m has been committed from the UK aid budget to tackle plastic pollution, helping developing countries to prevent plastic waste entering the ocean. Ministers have also implemented some of the toughest rules in the world to restrict the use of microbeads which can severely damage the marine environment.”

During her time as Environment Secretary, Theresa brought forward extensive measures to crack down on plastic waste and pollution. These include new obligations on businesses who produce plastic packaging to pay the cost of its disposal, extension of the plastic bag charge, and a deposit return scheme for drinks containers.

She also helped secure a commitment in the 2019 Conservative general election manifesto to £500m Blue Planet Fund, to help developing countries protect the ocean from key human-generated threats, including pollution.