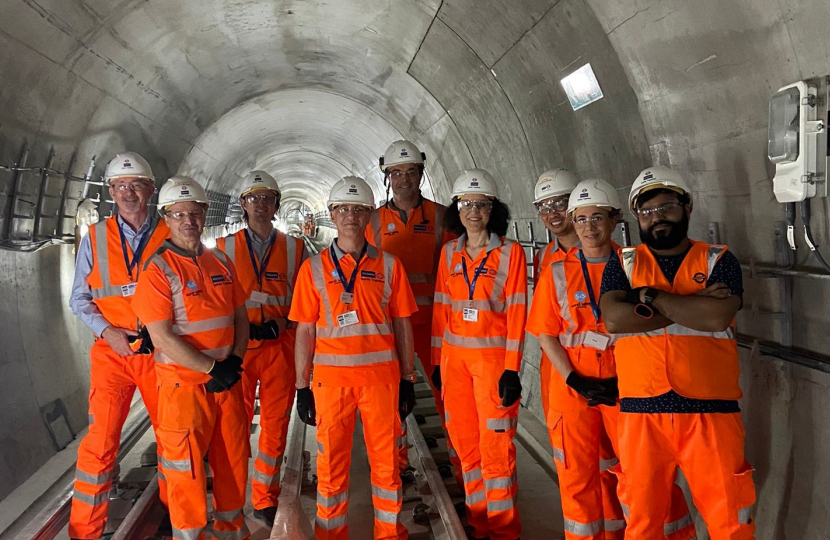 Ukraine has continued to dominate many of Parliament’s proceedings and work is underway at pace to ensure refugees can come to the UK via the family reunion and home sponsorship schemes. I recently met the newly appointed Minister for Refugees, Richard Harrington, to urge him to speed up these processes. I also felt honoured to have been present for the historic virtual address to Parliament by President Zelensky.

I received some very good news on the controversial plan by TfL and the Mayor of London to build blocks of flats over the station car park at Cockfosters. Knowing constituents’ opposition to these proposals, I repeatedly called on the Department for Transport to intervene. Transport Secretary Grant Shapps has now written to me to say that he has refused an application by TfL to build on the site. This may be subject to challenge, or TfL could come forward with a new plan to build. But for the moment, this project has been blocked, despite it being given the green light by Enfield council.

I also formally presented my #SaveBarnetPoliceStation petition to Parliament. Although there has been a partial reprieve after the Deputy Mayor for Policing promised alternative accommodation for neighbourhood officers, I am still campaigning to keep a fully functioning police station in my constituency.

I am the 263rd woman to have been elected to the House of Commons and female MPs gathered together to mark International Women’s Day earlier this month. Only 559 women have ever been elected since they were first permitted to stand in 1918 – so in more than a hundred years, that is fewer in total than 650 MPs who currently sit in Parliament. My programme for International Women’s Day included a conference on the plight of women in Iran who are subject to extensive human rights abuses.

Media appearances included Politics London and BBC Radio Four Broadcasting House. I have also met a number of groups since my last e-newsletter such as: Christian Solidarity Worldwide, to discuss their work to protect religious freedom; Letterbox Distribution and Gold Key Media to see the lorry load of donations they are dispatching from New Barnet to Poland to support Ukrainian refugees; the Zionist Federation and Christian Friends of Israel to show my support for their annual parliamentary lobby day for Israel; BT Openreach to appeal them to include the Chipping Barnet constituency in their delivery of ultra-fast fibre-to-the-premises broadband; and London Underground to urge them to remedy the fault with train information boards at High Barnet which has been causing chaos at the station (work to fix the software fault responsible is due to start tomorrow).

Lastly, it was good to see Passenger Locator Forms dropped and the last Covid travel restrictions lifted. I had been pressing for this to happen to remove these costs from family holidays. I fully appreciate the anxiety felt about rising cost of living and in Parliament yesterday, I highlighted how important it is to get energy prices down to protect pensioners and other vulnerable groups.

Mayor's plans to build over suburban station car parks blocked
In a letter to Chipping Barnet MP, Theresa Villiers, Transport Secretary Grant Shapps has announced that he has refused an application made to him by TfL to allow them to build tower blocks over Cockfosters station car park.

Ms Villiers has spearheaded a lengthy campaign against this project, and others by TfL and the Mayor to build on other station car parks such as High Barnet. Enfield council had approved the Mayor's proposal for 14 storey tower blocks to be built at Cockfosters, but he also needed permission from the Transport Secretary to remove the land from its current use as a park-and-ride scheme. Read more….

Petition to save Barnet Police Station presented in Parliament
MP Theresa Villiers formally presented a petition in Parliament this month signed by more than a thousand people asking for the London Mayor not to close down and sell-off Barnet police station. Read more….

Villiers visits construction project at Northern Line Bank station
Your local MP, Theresa Villiers, was shown around the construction site of London Underground’s £600m project to expand the capacity of Bank station in the heart of the City of London last week. She has been following this carefully because it has led to a 17 week closure of the Bank branch of the Northern Line south of Moorgate. Read more….

Keep East Barnet and Brunswick Park in Chipping Barnet! Have your say on new parliamentary boundaries
The Boundary Commission for England is consulting on a new map for parliamentary constituencies. They propose creating a “Mill Hill and High Barnet” seat which cuts out East Barnet and Brunswick Park wards and attaches them to a new “Southgate and Barnet East” constituency, falling mainly in the borough of Enfield.

If you want to keep these areas in a Barnet constituency, please let the Boundary Commission know by responding to their consultation at: https://www.bcereviews.org.uk/. Read more….

Barnet MP backs Microfinance
Theresa Villiers MP has thrown her support behind a campaign by her constituent, Jenny Blythe, to raise awareness of microfinance projects in Africa. Microfinance is a type of banking that provides small loans to women in the developing world to help them start-up businesses and generate income to support their families. Read more….

Theresa’s next diarised surgery takes place from 1030 to 1200 on Saturday 2nd April at her constituency office at 163 High Street. Constituents wishing to see Theresa or her staff will need to make an appointment in advance. You will NOT be seen if you turn up without a pre-booked appointment. Bookings for face-to-face meetings or Zoom calls can be made using the contact details set out in the preceding paragraph.