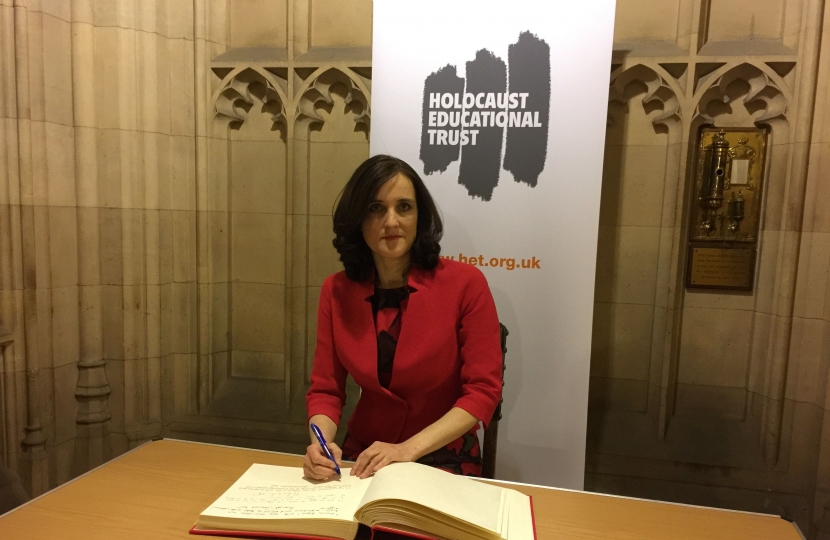 Theresa Villiers, MP for Chipping Barnet, attended Barnet Council’s annual commemoration of Holocaust Memorial Day at the weekend, along with Mike Freer, MP for Finchley and Golders Green and Matthew Offord, MP for Hendon. The event took place on Sunday at the Rickett Quadrangle of Middlesex University in The Burroughs in Hendon.

Speakers at the commemoration included the Mayor of Barnet, Cllr Mark Shooter, the leader of the council, Cllr Richard Cornelius, the Reverend Bernd Koschland, and Olivia Marks-Woldman, Chief Executive of the Holocaust Memorial Day Trust. Choral music was provided by the London Cantorial Singers and the Alyth Youth Singers.

Following the event, Theresa Villiers MP said “I believe that Holocaust Memorial Day is crucially important. We must never allow this horrific part of Europe’s history to be forgotten. It should always serve as a reminder of the appalling consequences to which racism, intolerance and hatred can lead.”

“I have been attending Barnet Council’s commemoration for over ten years and I always find it very moving. The Mayor of Barnet spoke eloquently about how many of his relatives escaped from Nazi persecution but sadly his great grandmother did not and became one of the millions of victims of the Holocaust.”

“Both the Mayor and leader of the council spoke about the importance of Holocaust commemoration for a borough like ours which is one of the most ethnically and culturally diverse in the UK. As well as an opportunity to reflect on the victims of the Holocaust, this was a day to celebrate the values of equality of treatment and mutual respect and understanding between different parts of our multi-faith, multi-ethnic community.”

“I welcomed that fact that the Barnet Statement of Commitment was read to the commemoration by two students from JCoSS school in East Barnet, Jonah Zur and Matthew Clayman, who had visited Auschwitz with the Holocaust Educational Trust to learn about the Holocaust and the lessons it provides to our society today.”