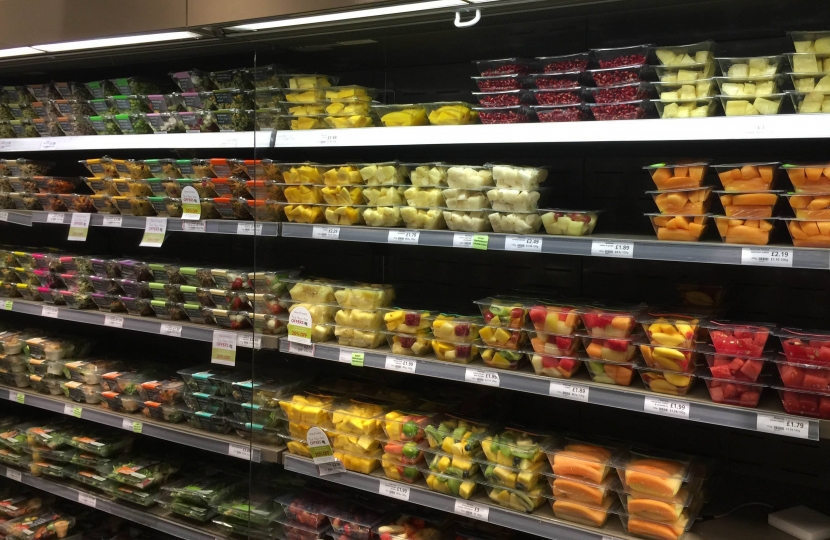 After receiving a number of emails from constituents expressing concern about food waste, Theresa Villiers, MP for Chipping Barnet, is urging local supermarkets to do more to reduce the amount of food thrown away. She is also taking up this issue with Government ministers and with the Council and in the following article, she sets out some of her views on the issue:

“I support the efforts being made by the charity WRAP (Waste and Resources Action Programme) to cut food waste. They have been working with the Government, local authorities, food retailers and the food industry on this goal. Food waste has also been debated in Parliament.

In Government, Conservatives have backed several rounds of the Courtauld Commitment. This is a voluntary agreement to limit waste and 90 per cent of the food manufacturing and retail sector have signed up. As a result, domestic household food waste has been reduced by 21 per cent, and food waste in the supply chain has reduced by 8 per cent. The process has also seen the amount of redistributed surplus food double between 2011 and 2013.

Separately, a voluntary agreement within the hospitality and food services industry was launched in 2012. Over 170 signatories and supporters have signed up to an ambitious set of targets, both to reduce the amount of food waste they produce, and to manage it better by recycling and sending food for anaerobic digestion to produce energy.

I would like to see the food industry and the food retail sector forge closer links with redistribution charities. I was interested to hear about the new policy in France requiring supermarkets to donate food that would otherwise go to waste to charity. While I there are no plans that I am aware of to replicate this here, it will be interesting to see how this initiative works in France to see if there are successful aspects of it we can introduce in the UK

At a local level in Barnet, the proportion of food being recycled has increased considerably with the new brown bin system introduced by the council.

Because a constituent asked me what local action I was going to take on this important issue, I have been in contact with some of the biggest food retailers in my constituency, Waitrose, Marks and Spencer, Sainsbury’s and Tesco, to urge them to do more to reduce food waste. They have all confirmed their commitment on this issue and I plan to meet representatives of retailers over the coming months to press them directly on what further action they can take.

If you want to reduce food waste in your own home, you can find helpful tips on how to do so at the Love Food Hate Waste website or by finding them on Facebook.”