Campaign to clean up air quality in Barnet 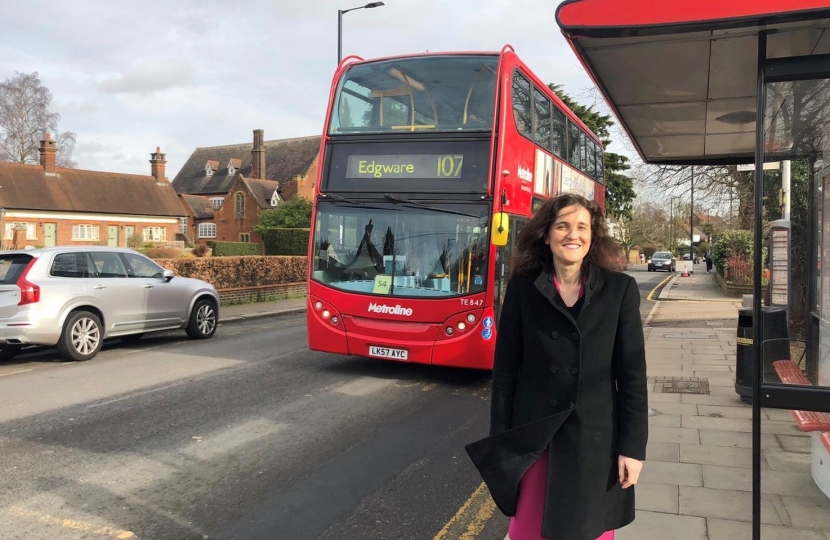 Cleaning up the air we breathe is a vital element of Theresa Villiers' plan for improving life in Barnet. In this article she sets out some of her work on this issue so far....

"A key part of what I want to achieve for my constituents in Chipping Barnet is to improve air quality. I am keeping up the pressure on the Mayor of London and the Government to drive forward action to tackle pollution.

Poor air quality is the greatest environmental threat to public health. Every year thousands of people have their health damaged or their lives shortened by air pollution. Our air is now cleaner than at any point since the industrial revolution, but there is more work to be done if we are to protect the health of our nation.

The Government is committed to cracking down on air pollution. Its 2017 Clean Air Strategy was praised by the World Health Organisation as “an example for the rest of the world to follow”. It sets out the ambitious goal to halve the number of people living in locations with concentrations of particulate matter above WHO guidelines.

In my former role as Secretary of State for the Environment, Food and Rural Affairs, I put forward an Environment Bill to set even tougher targets for cleaning up the air we breathe.

This landmark new law will embed environmental principles at the heart of government decision-making. It will set a legal framework for a rigorous system of target-setting, monitoring and accountability, and has been widely welcomed by environmental campaigners.

One of the most important and ambitious elements of the Bill is that it requires the Government to set a legally-binding target to reduce PM2.5 fine particulate matter, the type of pollution which does the greatest damage to human health. I hope and expect that the target which will be set will be amongst the toughest in the world.

The Environment Bill will also give councils more powers to improve air quality and ensure only the cleanest domestic fuels and stoves can be sold. The Government recently announced that the most polluting fuels used in domestic burning will be banned by early 2023.

The framework set out in our Clean Air Strategy and the Environment Bill is part of a wider efforts to transition to a low emission economy.

For example, the Government is taking forward a £3.5 billion plan to reduce harmful emissions from transport. The investment includes £1 billion to support the uptake of ultra-low emission vehicles, nearly £0.5 billion to help local authorities implement local air quality plans, and about £90 million for the Green Bus fund. Earlier this month the Prime Minister announced a £5 billion fund to improve bus services in England (outside London) including the purchase of 4000 ultra-low emission buses.

We have made a commitment that the sale of new petrol and diesel cars will be brought to an end by 2040 and we are consulting on plans to bring forward the date to as early as 2035. We are investing massive sums in research and development to make electric cars a more practical affordable option for people. That includes the £250 million Faraday Challenge to improve battery technology. We are pushing forward a major programme to improve the network of electric charging points across the country.

In recent years, the Government has provided over £150 million in support of measures that will help improve air quality in London. That includes funding to retrofit hundreds of buses to reduce emissions. Last year alone, £10m was allocated to the London Mayor for cleaner buses. I am concerned that the Mayor of London has not made more progress on air quality measures or delivering a low emissions bus fleet, despite the very significant resources he has been given by the Government to do this.

During my time as Environment Secretary I pushed forward measures to improve air quality and I shall continue to do that from the backbenches as MP for Chipping Barnet, so children and young people can live longer healthier lives."

A recent Parliamentary question tabled by Theresa revealed that in the last 11 years, over £158m had been provided by the Government to the Mayor of London to support efforts to clean up air quality in the capital. The scale of this investment shows how seriously the Conservatives take this issue in London.

To ask the Secretary of State for Transport, how much funding has been allocated to the Mayor of London for reducing emissions from transport in each of the last 10 years.

The Government has provided the following amounts to help reduce emissions from transport in London since 2011:

TfL also received £5.7bn over the period 2016 to 2021 for general transport funding, which included funding to cover the implementation of measures to address air quality.