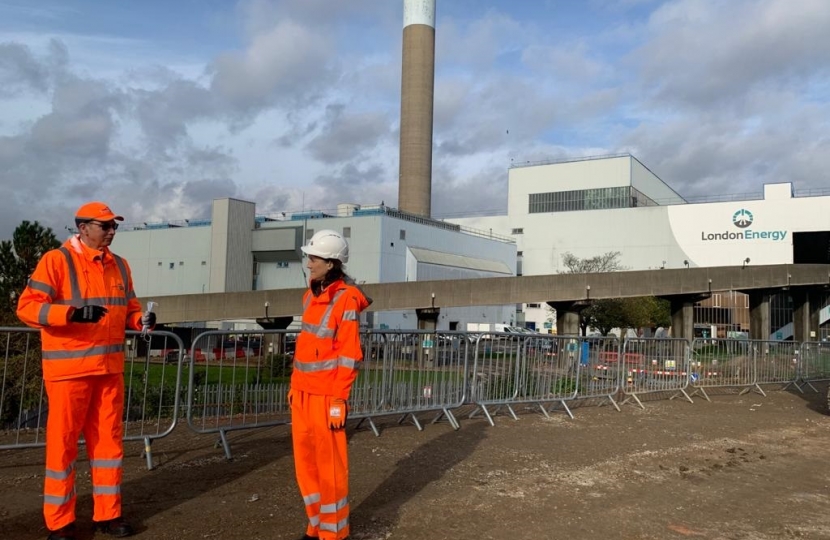 Theresa Villiers, MP for Chipping Barnet, has visited the construction site of the North London Heat and Power Project (NLHP) at the Edmonton Ecopark.

Almost all waste from the borough of Barnet goes to this site which is run by the North London Waste Authority (NLWA), the statutory waste disposal authority for the boroughs of Barnet, Camden, Enfield, Hackney, Haringey, Islington and Waltham Forest.

NLWA deal with the waste produced by over two million people amounting to three per cent of the UK’s household waste. The North London Heat and Power project will see their current incinerator replaced with a new one, along with facilities to increase recycling. The plant is reaching the end of its operational life and a replacement is needed to prevent sending rubbish to landfill in the future.

Development consent was granted for the NLHPP in 2017 following consultation, environmental assessment and analysis of alternative options. Works started in 2019 to prepare the site for construction.

During her visit, Theresa was briefed on the NLHP as well as being shown round the preparatory construction site by Martin Capstick, Chief Executive of the North London Waste Authority.

“Getting the right solution for disposing of waste is crucial if we are to meet our commitment to becoming a net zero carbon economy. We also need to ensure that waste disposal does not contribute to air quality problems," Theresa said after finishing the tour of the site.

“During my visit today, I pressed the representatives of NLWA on these points. I was pleased to receive assurances on both. It is essential that this new plant is a clean as it possibly can be so that it plays its part in tackling air quality problems and reducing carbon emissions.”

“I also urged NLWA to learn from the mistakes made in relation to their previous plans for new facilities including a waste plant at Pinkham Way. I campaigned strongly against this plan and it was dropped in 2013. I will continue to be vigilant on this issue to prevent any revival of proposals to use Pinkham Way for waste purposes.”

The NHHP will be publicly-funded, publicly-owned, publicly-run project. This is in contrast to NLWA's failed PFI project which collapsed in 2013 and which included plans for a waste facility in Pinkham Way. The Pinkham Way site borders Theresa’s Chipping Barnet constituency and if a waste plant had been built there it would have been very close to homes in her constituency.