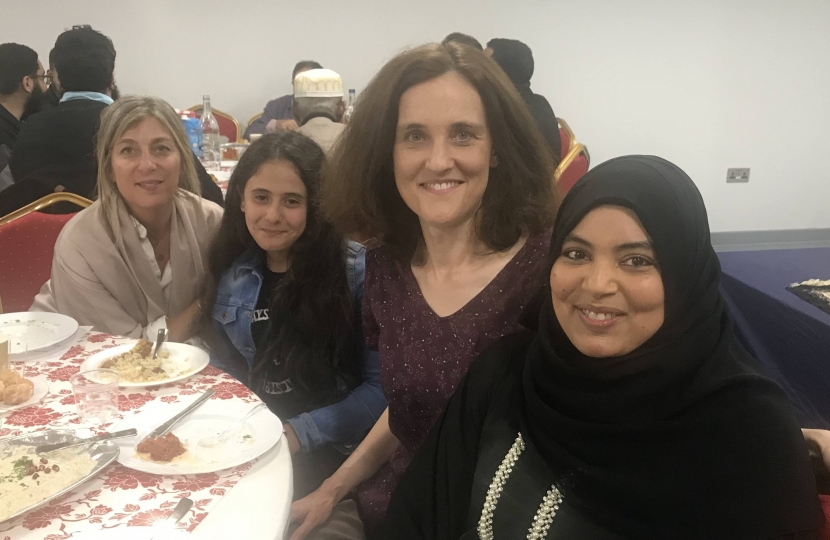 Iftar meals take place on each evening of the Ramadan fast. The mark the end of the fast for the day and provide an opportunity for followers of the Muslim faith to get together with friends and family. The special Iftar celebration hosted by SBWA at the weekend welcomed guests from several different faith communities including Finchley Reform Synagogue, Finchley Progressive Synagogue, and the Church of England.

Six years ago, SBWA's Islamic cultural centre in Muswell Hill was burnt down in a racially motivated arson attack. Many in the community came to their aid, including Finchley Reform Synagogue, which has been hosting Ramadan prayers for SBWA since 2013.

Following the attack, Barnet Council promised to find SBWA a building to replace the one they lost and this led to the construction of the new community hub in East Finchley.

“It was great to share this multi-faith Iftar meal with friends from SBWA in their new community centre; and it was brilliant to have representatives from local churches and synagogues there too,” said Theresa.

“Those who sought to foster hate and division by burning down SBWA’s building six years ago have failed in their objective. That crime caused people to come together to offer support and friendship to the Somali Bravanese community. As result, long-lasting new friendships have been formed, especially with Finchley Reform Synagogue and Finchley Progressive Synagogue who have done so much to help SBWA.”

“Many thanks to Barnet Council for ensuring SBWA have a brand-new community hub building, and well done to Abubakar and Asma Ali and everyone at SBWA for all they have achieved in such difficult circumstances.”

SBWA runs educational programmes for children and young people which have been temporarily housed in the Barnet Council's offices at Barnet House in Whetstone.

It is hoped that these activities will move into the new centre in the next few months, marking an end to a long and difficult journey for SBWA since the loss of their Muswell Hill building.