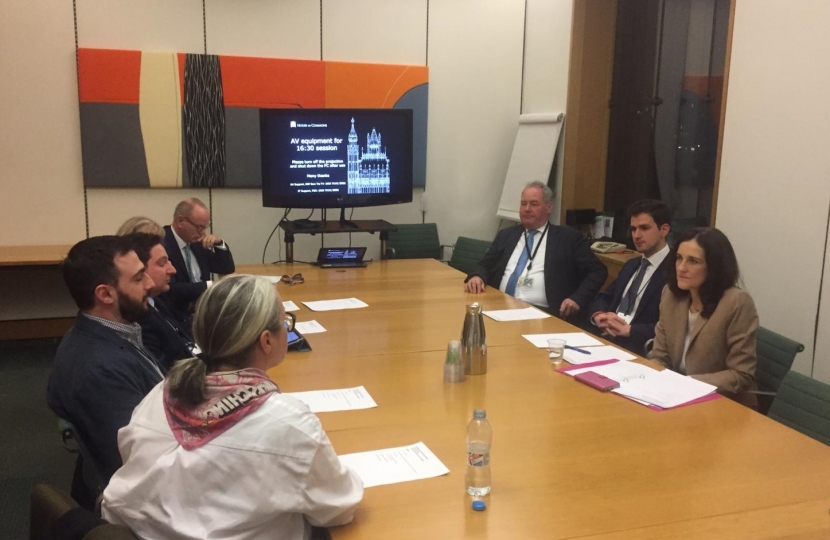 Campaigners, including fellow London MPs Bob Blackman and Mike Freer, and Gaynor Bond from "Hands Off High Barnet!", discussed the controversial Transport for London (TfL) proposals for car parks such as High Barnet and Cockfosters.

A planning application is due to be submitted soon in relation to High Barnet, which means a major loss of parking spaces and construction of high-rise flats out of keeping with the suburban nature of the area.

“I was very pleased to bring Conservative colleagues from Harrow, Barnet and Enfield together in Parliament to discuss the campaign against these unacceptable plans from the Mayor of London and TfL,” Theresa said.

“Everyone remains committed to making the Mayor think again about these high-density and high-rise projects right in the heart of the suburbs. Together we made plans to step up our campaign of opposition against this attack on life in the suburbs”.

Earlier in the day, Theresa also met with TfL representatives who confirmed that the number of flats proposed at High Barnet would be reduced to 300, and plans to build over the wooded area next to the Meadway have been abandoned.

However, Theresa said she would continue to co-ordinate opposition to the proposals.

“There has been some progress, but not nearly enough to make the development acceptable to me or local residents,” she explained.

“It's still the case that almost all parking spaces would be lost, making life harder for commuters and for people using the car park during the evening and at the weekends to get into London.

“Like many others, I believe these proposals are completely wrong and I am continuing to campaign strongly against them.”

In another development, Conservative mayoral candidate, Shaun Bailey, pledged he would immediately stop development of tube station car parks from going ahead when he visited Barnet to discuss the issue recently.