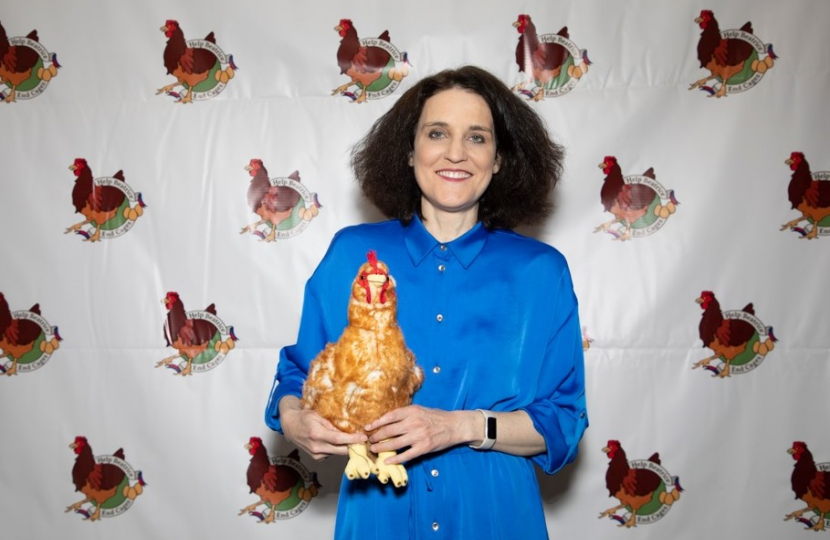 Chipping Barnet MP Theresa Villiers has called for progress in phasing out the use of cages in agriculture, but with the same welfare standards included in trade deals to safeguard UK farmers from unfair competition from lower welfare jurisdictions.

The former Environment Secretary said that any bans had to be taken forward in a ‘viable and sustainable way for the farming sector’.

The debate took place following a 109,000 online petition presented to Parliament asking for the ban.

Speaking in Westminster Hall, Theresa said: “I am here to make the case for a managed transition away from the use of cages in farming.

“I am worried about enriched cages in which laying hens may have little more space than an A4 sheet of paper.”

Most cages for laying hens have been banned for many years but so-called “enriched” cages are still legal.

“As RSPCA research shows, such systems restrict natural behaviour such as wing flapping, running and dust bathing. With all UK supermarkets either having stopped selling eggs from caged hens or committed to do so, now is the time to set the timetable for an end to enriched cages.”

She said that a managed approach was important as the cost-of-living bites on households.

“At a time of inflation, we must take care not to do anything to cause pressure on food prices,” she said.

“The Government has now started delivery of their new farm support system. This debate demonstrates that we need a scheme under the new Environmental Land Management programme that is focused on higher welfare standards in the poultry sector.

“That is one of the ways we can smooth the way for the ban on cages that so many of our constituents want to see happen. Many major companies are backing the campaign, including Nestlé and Greggs. Over 75% of the restaurant sector have committed to going cage free in the eggs that they buy.”

She told MPs that Switzerland and Germany had banned enriched cages – showing that it was economically viable to do this.

“The Government promised to look at the issue in its 2021 action plan on animal welfare, so let us see the consultation published to take us closer to the day when we ban cages for laying hens.”

She also highlighted the importance of switching away from farrowing crates for sows to “free farrowing” systems who do not confine pigs in cramped conditions, and she asked for a plan from the Government, working with farmers, to reach that goal.

She added: “I have been clear that I do not believe that we should allow our own producers to be driven out of business by competition from lower-welfare imports.

“Whether it is cages or crates, we have to ensure that the rules we impose domestically are reflected in our international trade policy. It is important to ensure that our farmers can compete on a level playing field and that they are not driven out of business by low-welfare competition from overseas.”

She then explained that the Government had a strong record on animal welfare including mandatory CCTV in slaughterhouses; a ban on third-party sales of puppies; and an increased maximum sentences for animal cruelty.

“Let us strengthen that record still further by listening to the petitioners today, who want to see an end to the cage age,” she added.