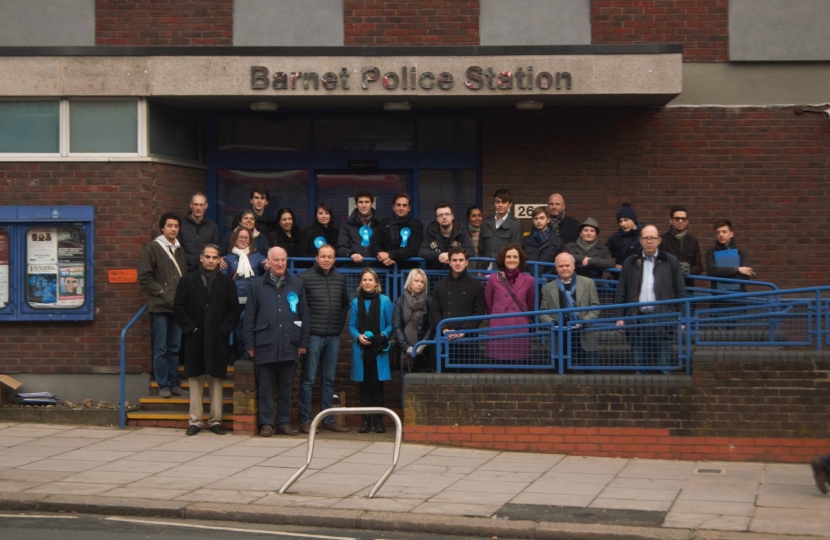 At a meeting with Chipping Barnet MP, Theresa Villiers, the borough police commander for Barnet, Chief Superintendent Sarah Leach, has confirmed that Barnet Police station will stay in police use until at least August 2020. The station’s front desk closed in 2017, but police officers have continued to be located in the building in Barnet High Street.

“This is very encouraging news for my campaign to save Barnet Police Station,” Theresa Villiers said following her meeting in Colindale with the borough’s most senior police officer.

“I have made many representations to the Mayor and the Met Police, urging them to save Barnet Police Station. So I very much welcome the confirmation from Sarah Leach that additional officers will move into Barnet Police Station in August. She told me that they will be there for at least 12 months, to enable renovation to take place at Colindale Police Station. It is even possible that the front desk at Barnet police station might re-open for part of this period, but that isn't definitely decided yet.”

“So there is over a year’s reprieve for the building, meaning it will stay in police hands until at least August 2020. It’s a relief to know there is no immediate threat of the station being sold off to developers. It’s therefore still possible for the Mayor of London to change his decision and save Barnet police station. I’ll keep pressing him to do that. Residents are increasingly worried about crime and they want the reassurance of having a local police station.”

Theresa Villiers has been running a campaign to save Barnet Police Station and re-open its front desk since the Mayor London announced his closure plans early in his mayoralty.