Why I am voting to leave the EU: Theresa Villiers 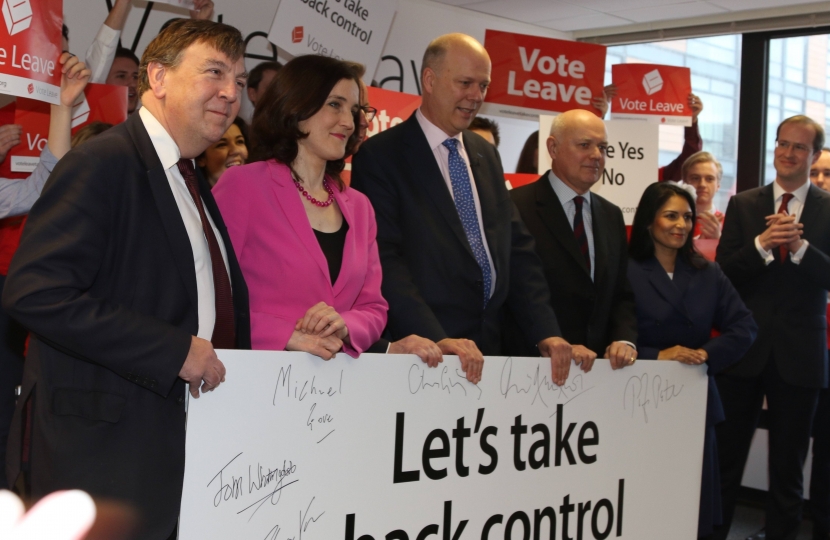 Theresa Villiers declared her support for the campaign to leave the EU following the meeting of the Cabinet at the weekend. She published the following article in the Sunday Telegraph, setting out some of the reasons behind her decision:

I well remember the moment almost exactly 29 years ago when I first learned that EU law had supremacy over the laws we make in this country. I was a law student at a university lecture in Bristol hearing an explanation of the case of Garland v British Rail. I recall the sense of incredulity I felt - a ‘double take’ moment of realisation that what was then called the European Community was not the trading arrangement many people assumed, but had in fact wrought a much more fundamental change to our constitution.

I warmly welcome the fact that very soon, for the first time in decades, everyone in the UK will have the chance to decide on our future relationship with Europe and I will be voting to leave.

I have not reached that position precipitately. It is hugely difficult for me to find myself on the other side of the debate from the Prime Minister for whom I have the highest regard and who I know is so profoundly committed to changing this country for the better. But I have reflected long and hard and cannot share his view on this issue.

Before being elected to the House of Commons, I spent six years as an MEP, seeing the European project at first hand and doing all I could to make the system work in the UK’s interest. I welcome the changes which the Prime Minister has achieved in his renegotiation, but I have come to the conclusion that the only way to fix our relationship with the EU is to leave and negotiate a fresh arrangement based on trade and cooperation, without the political obligations that inevitably come with membership.

It is time to take back control. If we leave the EU, we regain the power to make our own laws and control our own borders. We also get to decide how to spend the £19 billion a year we currently pay to the EU. Even if we continued with every penny of existing farm support, regional aid and other programmes funded by the EU in this country, we would still have billions left over to invest in the key areas we need to prosper such as science, skills, and infrastructure.

Whilst leaving is not without its risks, by far the greater risk comes with staying in. The EU is, and always has been, primarily a political project. I welcome the attempt to carve the UK out of the express commitment to ‘ever closer union’ but it will remain the case that the EU will only ever have one direction of travel – towards more centralisation, more harmonisation and more Europe. Indeed, for the Eurozone countries, there is a pressing practical need to move in this direction, towards the single budgetary and banking system they need to make their currency work.

If we stay in, we can inevitably expect a long stream of instances where we will be outvoted and our national interests overridden by the voting strength of others. Even where we secure protection and opt-outs in EU directives, the relentless federalism of the European Court of Justice will continue to drive further political integration. From the earliest days of the European project, the court has repeatedly taken a maximalist approach to treaty obligations. The supremacy of European law is an inevitable aspect of EU membership and while it prevails, we cannot say we run our own country.

When I was in the European Parliament I was accused of being a dangerous extremist because I believed this country should keep its own currency. Well those of us who opposed Euro membership have been proved right. Events of recent years have shown clearly how damaging it would have been to tie the future of our economy to the untested and high risk project creating the Euro. Now the same people who told us it would be disastrous if we stayed out of the Euro are predicting an economic wasteland if we leave the EU. They were wrong then and they are wrong now.

I agree with the Prime Minister’s statement that this country can be a success outside the EU. I do not accept the scare stories that the EU would refuse to do business with us if we left. There are many countries around the world which do business with the EU without being members of the EU. The rest of Europe sells far more to us than we do to them and it would be manifestly against their interests to start a trade war with a major trading partner which is on their doorstep and which is the fifth biggest economy in the world.