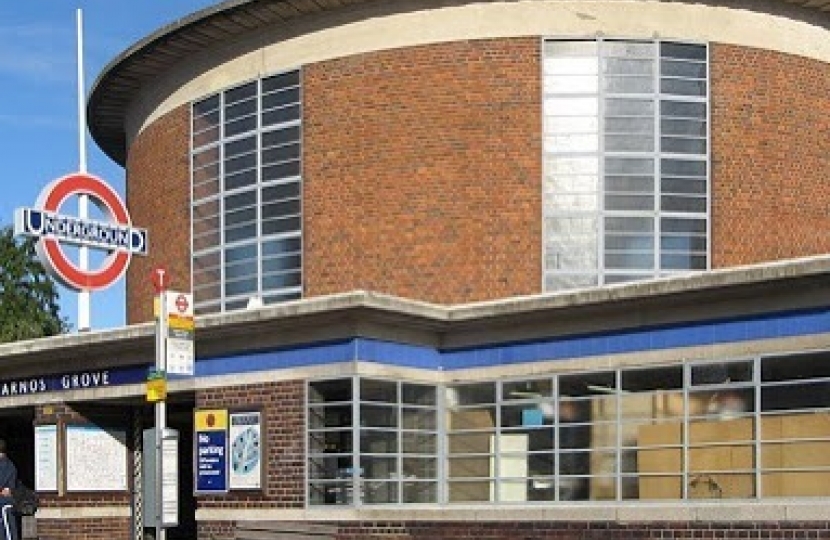 Chipping Barnet MP Theresa Villiers has welcomed the decision by Enfield council to throw out plans to build 162 flats, up to seven storeys high, over the car park at Arnos Grove station.

The scheme now goes on to the Mayor of London to consider, meaning he gets to decide on what is effectively his own planning application. These station car park proposals are being put forward by a partnership between Transport for London (TfL) and developers Grainger.

The Mayor can either let the decision stand, or ‘call it in’ and overrule local planners.

No councilor voted for the development, with 11 voting against and one abstaining.

In her speech to the committee, Theresa said station car parks perform a crucial function in suburban areas where many residents live beyond walking distance of their nearest station.

“The loss of the car park will hit both commuters and residents using the station in the evenings and at weekends for shopping or leisure, or to visit friends and family,” she explained.

“Bus services are not a substitute, especially for people back from work later in the evening when timetable frequency is reduced.”

And she added that TfL severe financial difficulties meant it was “inconceivable” that extra bus services would be introduced to help people who previously drove the station.

She told councillors the elderly and disabled would suffer from the loss of 297 parking spaces. She also pointed out that overspill parking would have a massive impact on the surrounding roads if the car park was removed and replaced with 162 new households with no off-street parking.

She quoted the Federation of Enfield Residents’ Associations who described the density of the build as “extraordinary and unacceptable”.

Speaking after the meeting Theresa said: “Thousands of local people signed an e-petition opposing this development and more than 100 wrote to the council to object, so this is a victory for north London residents who are determined to keep the character of their suburbs intact.

“I am delighted this has happened and I now urge the Mayor of London to listen to local people and not allow this overdevelopment and very bad idea any further consideration.”

The Arnos Grove application is one of several similar schemes from TfL proposed for station car parks in north London, including Cockfosters, High Barnet and Finchley Central. Theresa has been strongly campaigning against these proposals from the Labour Mayor.

Conservative London Mayor candidate Shaun Bailey has vowed to scrap these station car park building plans if he is elected.

Arnos Grove is outside Theresa's constituency but she was involved in the campaign to save the car park because a number of her constituents in the Brunswick Park area use the station.