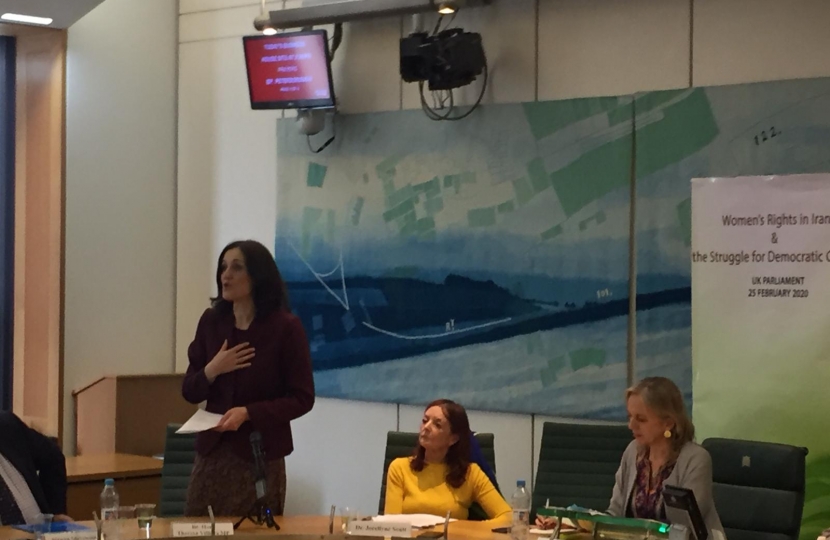 One of the many events to mark International Women's Day in Parliament was a recent event hosted by the British Committee on Iran Freedom which is made up of UK Parliamentarians who support democratic change and reform in Iran. Theresa Villiers was asked to address the conference and gave the following speech:

"I welcome the chance to take part in this important event for the British Committee on Iran Freedom.

Just over 100 years ago, the first ever speech by a woman in the Chamber of the House of Commons took place. It was made by Nancy Astor and some of her views were truly repugnant but the fact that the speech was made is still something we should celebrate as we prepare for International Women’s Day on 8th March.

This annual event in our calendar becomes more important every year. It is an opportunity to recall the huge progress made in this country and across the world in tackling discrimination against women and opening up opportunities for them to realise their potential.

For more than a 100 years, this country has been moving slowly towards greater gender equality in an important example of the levelling up which is such an important theme of today’s political discourse.

There is certainly much to celebrate with more women in senior positions in business, politics and professional services than ever before. But International Women’s Day is also a time to reflect on the battles yet to be won for gender equality.

In many countries around the world, women are deprived of the basic legal rights which we take for granted here. And no where is that more true that in the Islamic Republic of Iran. All of Iran’s citizens, men and women, are subject to drastic restrictions on their freedom of speech and many journalists languish in jail.

It’s also the case that brutal punishments can be inflicted on those who speak out against the regime or take part in protests. And the excessive use of the death penalty has seen many hundreds of people lose their lives for offences which would attract modest sentences in this country.

But women in Iran are singled out for harsher treatment than men are. They are treated as second class citizens by the legal system, they are barred from holding certain offices … their rights to travel are constrained by the need to acquire consent of a husband or father and they are systematically deprived of economic opportunities.

The 2020 Global Gender Gap report from the World Economic Forum placed Iran as 147 out of 152 countries on women’s economic participation and opportunity.

And overlaying all of this is the oppressive treatment and harassment meted out to any women who does not comply with Iran’s compulsory dress code.

As I have done at this event in previous years, I pay tribute to the women who have been taking part in political protests in Iran. It is clear that women are at the forefront of calls for democratic change and reform in Iran. Many women have been arrested and imprisoned as a result of recent protests and sadly some are amongst the people shot dead by security forces. It’s a regret that the media coverage of the Iranian protest movement has been so minimal.

I welcome the work being done by the British Committee on Iran Freedom and the National Council for Resistance in Iran to highlight the oppression of women by the Iranian regime.

I know that we all hope that one day the situation will change and that we will see the Iranian people given the freedom, democracy and human rights they should be entitled to.

In the meantime, I salute the bravery of women in Iran who are campaigning for equality and human rights, despite the huge personal risks that involves.

I believe that one day that long struggle will be successful, and that we will eventually see a free Iran which offers respect and equality to both men and women and offers all its citizens a brighter better future.