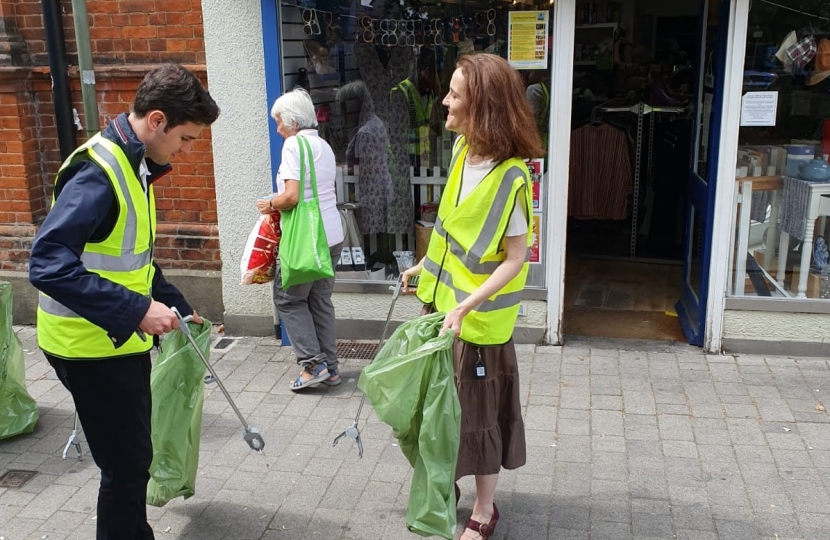 Protecting our local environment has always been a priority for Barnet MP, Theresa Villiers. She has longstanding concerns about litter and flytipping and has welcomed the decision by Barnet Council to substantially increase funding for street cleaning.

Theresa has raised concerns about litter in debates in Parliament, and during her time as Secretary of State for the Environment, she gave formal Government support to Keep Britain Tidy’s Great British Spring Clean campaign.

She also brought forward a new Environment Bill which includes important provisions on reducing plastic waste; promoting recycling through a deposit return scheme for drinks containers; and measures to ensure that firms producing plastic packaging fund the cost of disposing of it. This legislation also contains measures to crack down on waste crime. As Secretary of State, Theresa established a new multi-agency group to enable law enforcement authorities to work more closely together to tackle flytipping and other waste crimes.

Following a meeting with senior officers at Barnet Council, Theresa said “I am worried that problems with litter and flytipping seem to have become worse during the Covid outbreak. It is deeply antisocial for people to leave their rubbish around. This creates an eyesore in our community as well as harming wildlife and the natural environment.”

“I very much welcome the decision the council to increase the budget for street cleaning by over £1 million, partly funded by garden waste green bin charges. I thank them for taking action when I report litter and flytipping problems raised with me by constituents.”

“During my meeting with council officers, I pressed them to take enforcement action against people throwing litter from cars or dumping rubbish. It is good to hear that they have funding for more CCTV cameras in flytipping hotspots. It is also vital to keep our parks free of litter and ensure bins are emptied regularly.”

“Important measures to tackle waste crime are contained in the Environment Bill and I will be urging the Government to get this on to the statute book. It is now over a year since I introduced this Bill to Parliament and we need to speed up progress on it.”

Theresa Villiers regularly takes part in volunteer litter-picks. With the “stay-at-home” order soon to be lifted, she hopes to start up this activity again soon (with appropriate social distancing observed). The photo features Theresa Villiers and Cllr Roberto Weeden-Sanz taking part in a litter pick in High Barnet.

Litter and flytipping in Barnet can be reported to the council via the following link: