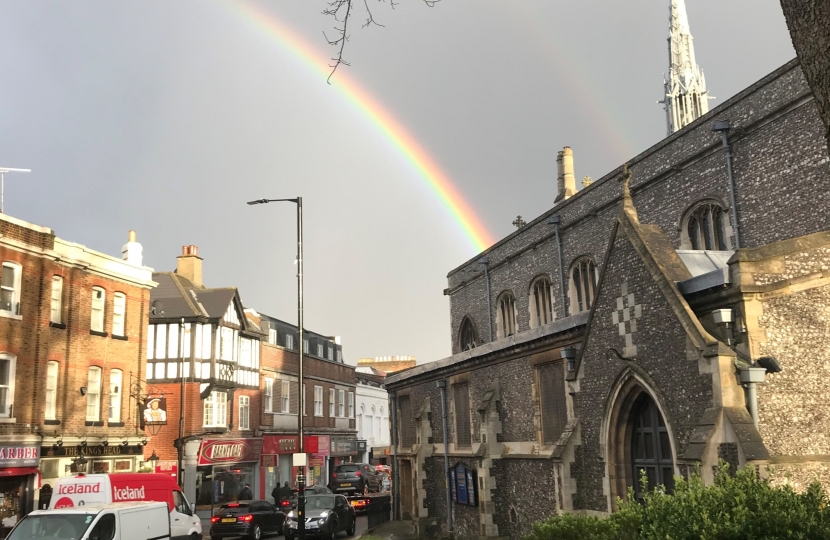 Welcome to my March e-newsletter. The big news during March has of course been the continuing success of the vaccination programme. 30 million people have now received their first jab and this made it possible for the formal “Stay at home” order to be lifted yesterday. Cases in Barnet are down to a rate of less 25 per 100,000, which is the lowest level since early last autumn.

Rising case numbers in Europe show that we are not out of the woods yet which is why a cautious approach is being taken to moving out of lockdown. As I set out in my last e-newsletter, I urged the Chancellor to provide continuing support for jobs and businesses damaged by the outbreak, and I welcome the extension of the furlough, SEISS and business rate holiday schemes which Rishi Sunak announced in his Budget.

The contributions I have made in Parliament during March included questions on: maintaining the timetable for getting people vaccinated; ensuring the UK’s new farm support scheme to replace the EU CAP is used to protect nature and habitats; addressing unfair competitive practices and poor working conditions in the private hire vehicle trade; and the future of the UK steel industry.

I made speeches on animal welfare; the economic situation; Indian farming reforms; re-opening events and festivals after the pandemic; and protecting human rights in Sri Lanka. I also secured a debate on the 550th anniversary of the Battle of Barnet. If you would like to see the return of the highly successful Barnet Medieval Festival in this anniversary year, I would warmly encourage you to make a donation to their crowdfunding appeal at:

The festival was a fantastic day out in 2018 and I very much hope it will be able to go ahead as planned on 11th and 12th September.

Lastly, can I wish everyone celebrating Passover a Chag Pesach Sameach? Happy Holi to Hindus. And best wishes to all who will be marking Holy Week and celebrating Easter over the coming days.

550th anniversary of the Battle of Barnet debated in Parliament
MP Theresa Villiers has highlighted the 550th anniversary of the Battle of Barnet in Parliament this month to make the case that cultural events can help town centres recover from the pandemic. The 1471 battle was a victory for Edward of York (King Edward IV) over the House of Lancaster led by Richard Neville, Earl of Warwick (the Kingmaker), and it took place just north of what was then the small village of Barnet. Read more….

MP welcomes big increase in funding for tackling litter in Barnet
Protecting our local environment has always been a priority for Barnet MP, Theresa Villiers. She has longstanding concerns about litter and flytipping and has welcomed the decision by Barnet Council to substantially increase funding for street cleaning. Read more….

A pet is for life, not just for lockdown
Chipping Barnet MP Theresa Villiers has urged people to get their pets from rescue centres, rather than take the risk of buying puppies from unreliable online sources. She told MPs in Parliament that Covid had hit defenceless animals and those who protect them. Read more….

Planning application to build at Whalebones turned down again
Your local MP has welcomed the Mayor of London’s decision to support Barnet Council’s rejection of proposals to build over fields at Whalebones in High Barnet. The authority’s planning committee turned down proposals by developers Hill Residential in October last year for 152 houses and flats on the land, which is surrounded by a conservation area. Theresa has campaigned for many years, with local groups and residents, to stop this building project from going ahead. Read more….

Villiers bids for Budget support for pubs and hospitality businesses in Barnet
In the run-up to the Budget, Theresa Villiers MP urged the Chancellor to continue with grants and furlough support for local businesses in Barnet. As part of the process of re-Budget engagement between Chancellor of the Exchequer and backbench MPs, Theresa has spoken to Mr Sunak via Zoom and also submitted written representations. Read more….

Rubbish is key to meeting environmental goals
Chipping Barnet MP Theresa Villiers praised the waste industry and local councils for their Covid response and the vital role they will play in meeting the UK’s 2050 net carbon neutral target. Speaking at the virtual Recycling and Waste Management (RWM) conference, Theresa said the Government’s climate change ambitions were world leading and amounted to a “formidable list of environmental commitments”. Read more….

Villiers backs India in farming debate in Parliament
As a former Secretary of State for the Environment, Food and Rural Affairs, Theresa Villiers has had direct experience of the challenges of reforming farm support payments. In the recent debate in Parliament on farmers’ protests in India, she reflected on how difficult such reforms always are. She was the only backbench MP who took part in the debate to present a positive case for India and the reforms which have been under consideration there for around 20 years. Read more….

Whilst social distancing rules remain in place, all Theresa’s surgeries will be appointment-only and will take place via Zoom unless there are exceptional emergency reasons requiring a face-to-face meeting. The next surgery is on Friday 9th April. Anyone wishing to see Theresa or her staff will need to make an appointment in advance. You will NOT be seen if you turn up without a pre-booked appointment. Bookings can be made using the contact details set out above.