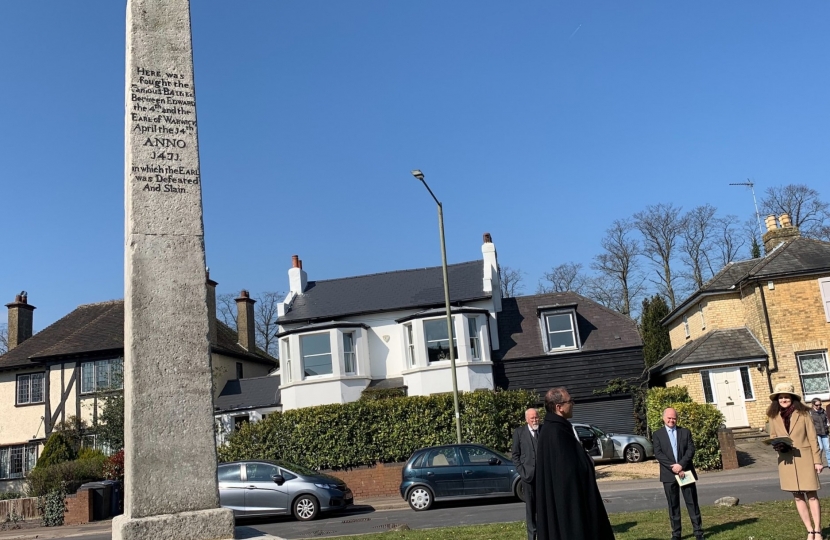 Fought in heavy fog on Easter Sunday on 14th April 1471, the battle was a decisive encounter in civil war between the rival York and Lancaster branches of the Plantagenet dynasty. Edward of York emerged victorious and the Earl of Warwick, the leader of the Lancastrian, forces was killed. Three kings were present that day, Edward IV, his prisoner the deposed Henry VI, and the future King Richard III.

Speaking after the event, Theresa Villiers said “This anniversary is a great opportunity to celebrate Barnet’s heritage. We have the only registered battlefield site in Greater London. No other battlefield is reachable by tube.”

“I strongly support local town centres in my constituency and highlighting Barnet’s history is a good way to bring more people to Barnet High Street. There is a debate about the exact location of the battle, but there are some great walks around the registered site in the Hadley Green, Hadley Common and Old Fold area which I warmly recommend to visitors.”

“I have spoken about the 550th anniversary in Parliament and I am encouraging people to donate to the Spacehive appeal underway to support the Barnet Medieval Festival which is due to take place on 11th and 12th September. That will be another great occasion to celebrate Barnet’s place in English history.”

The ceremony was led by Reverend Thomas Renz, parish priest of nearby Monken Hadley Church. Wreaths of red and white roses were laid by Deputy Mayor Cllr Lachhya Gurung and the Representative Deputy Lieutenant for Barnet, Martin Russell, recalling the respective symbols of Lancaster and York which led to their dynastic struggles being dubbed the Wars of the Roses. Theresa Villiers was asked to read an extract from TS Elliot’s poem Little Gidding.

At the start of proceedings, a minute’s silence was held in memory of His Royal Highness the Duke of Edinburgh. The event was organised by historian Susan Skedd and the team behind the Barnet Medieval Festival. The festival fundraising appeal can be found at: https://www.spacehive.com/battle-barnet-550