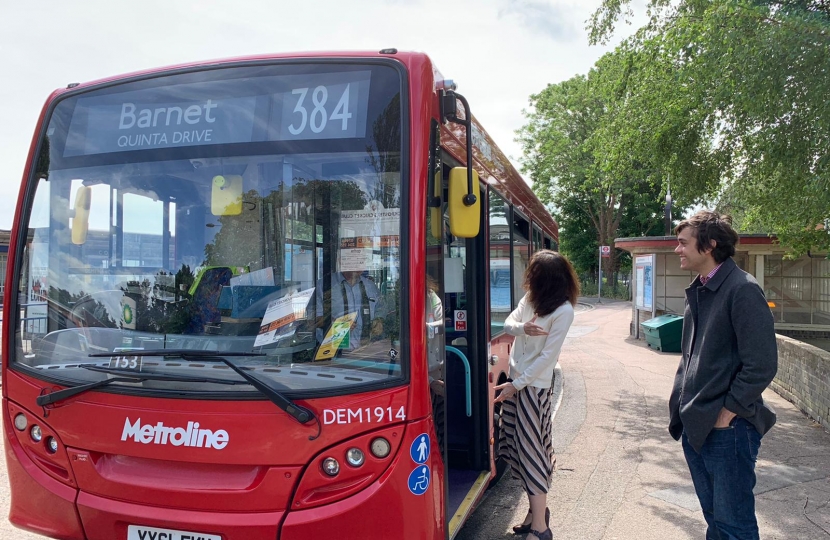 Shaun Bailey said the decision by the capital's present Labour Mayor to change the route was wrong and he would make sure the streets taken out of the service by Mr Khan would get their bus back.

The service was radically altered in September last year by the Mayor and TfL, despite widespread opposition to the plan in Barnet.

Theresa Villiers campaigned against the route changes, alongside Conservative East Barnet ward councillor, Felix Byers. They were worried about the impact of the changes elderly residents, people with disabilities and reduced mobility, and parents with young children, who have to walk further to catch a bus.

“I am delighted that Shaun Bailey has pledged to put the 384 back where it belongs - right in the heart of New Barnet where it so highly valued by local people,” said Theresa. “I have never stopped campaigning for the original route to be reinstated and we now have the chance to do it, if Shaun is elected as London Mayor on 6th May.”

Cllr Felix Byers said “The 384 bus was a lifeline for residents – and the decision by Sadiq Khan to remove it has hurt many lives. There has been huge dismay at the withdrawal of services from so many roads in the Bevan Estate and New Barnet. It is good news that Shaun Bailey has promised to reverse this damaging decision by the Labour Mayor of London.”

Shaun Bailey added: “There is almost universal support for the old 384 bus route — from everyone except Sadiq Khan. I don’t know why the Mayor ignored residents. No one forced him to sign off this change of route. So as Mayor, I’ll restore the 384 buses to their original route. That way, we put buses on the routes that residents actually need — instead of the routes a politician thinks they should need.”

One of the most controversial aspects of Mayor Khan’s 384 route changes was to send the bus down Salisbury Road in High Barnet which has led to congestion and traffic problems. Residents there have been campaigning to get their road off the route and are expected to welcome the announcement by the Shaun Bailey team.