550th anniversary of the Battle of Barnet debated in Parliament 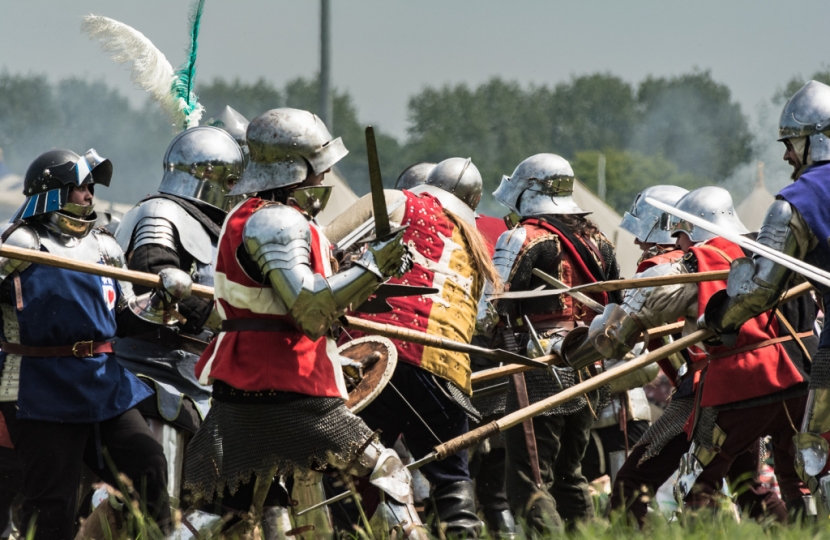 MP Theresa Villiers has highlighted the 550th anniversary of the Battle of Barnet in Parliament today to make the case that cultural events can help town centres recover from the pandemic.

The battle in 1471, during the Wars of the Roses, was a victory for Edward of York (King Edward IV) over the House of Lancaster led by Richard Neville, Earl of Warwick (the Kingmaker), and it took place just north of what was then the small village of Barnet.

Theresa told MPs the official site of the battle is the only one in the country to which people can travel by Tube and the only registered battlefield in Greater London. Recent work to identify the exact location of the battlefield has so far proved inconclusive; but it may turn out to be somewhat further north than the Hadley Green/Old Fold/Hadley Highstone site previously believed to have been where the fighting took place.

Barnet was the first battle in Britain to see the widespread use of handguns and the victory for Edward IV helped cement his efforts to build a more modern state by curbing the power of magnates.

“I am pleased to say that the most important reason of all to mark the anniversary is to promote Chipping Barnet and encourage people to visit our local town centre," she told the Westminster Hall debate.

“Once life returns to normal, I warmly encourage people to come to walk around the traditionally recognised battle site. Hopefully visitors will also stop off at some of Barnet’s excellent hospitality businesses, as indeed some of the victorious Yorkist troops apparently did after the battle.

“Even before Covid, local town centres right across our country had had a tough time as competition from online retail giants has intensified. But high streets are a crucial part of our community and we must find ways to ensure they survive.”

Theresa also said she continues to campaign to secure Government support for insurance for events like the Barnet Medieval Festival, which was cancelled last year but will hopefully take place on the 11th and 12th September.

“Many who are trying to put on events this summer are finding it difficult or impossible to get insurance,” she explained.

“We risk a further summer of cancellations if this problem isn’t resolved. So, I would urge Ministers to provide same kind of support for festivals and events as they have already given to the TV and film sector - for the sake of economic recovery, to signal that the UK is open for business again this summer, and to enable families to have some memorable days out after the toughest 12 months any of us can remember.”

During her speech, Theresa encouraged people to pledge donations on Barnet Medieval Festival Spacehive page at:

At the start of the debate, Theresa expressed her support and sympathy to all those affected by the pandemic as the nation reflects on one year since the start of the first lockdown. She joined other MPs in the Chamber of the House of Commons at noon for a minute's silence to remember the victims of the outbreak. The full transcript of the speech in reported in Hansard here: