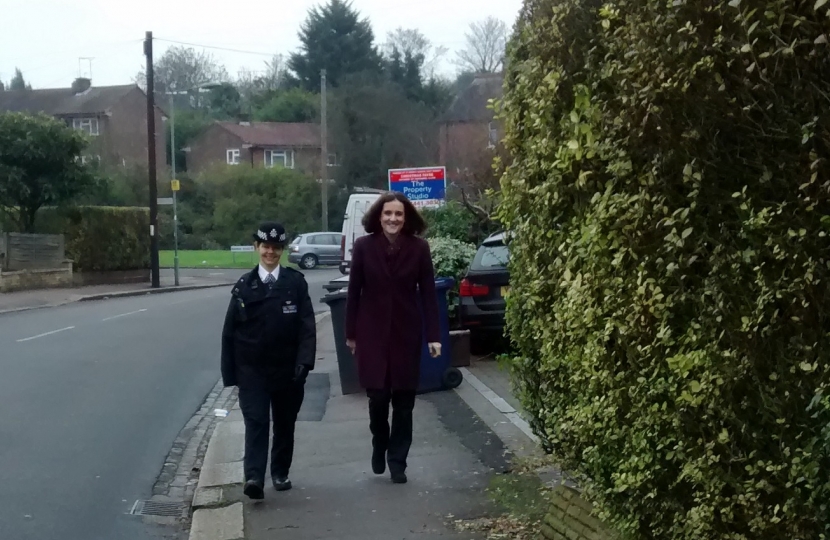 Campaigning to keep her constituents safe from crime has always been part of the work of Theresa Villiers as a busy MP. Since she was first elected in 2005, she has been involved in many campaigns for effective policing.

She has always called on the Government and the police to take a tough approach on burglary, a crime which is more prevalent in Barnet than in some other London suburbs. For nearly four years, she held very sensitive responsibilities regarding national security and terrorism in her Cabinet role as Secretary of State for Northern Ireland.

She has repeatedly pushed for Barnet to have its fair share of officers and has successfully campaigned several times for more police on the beat. For example, in 2006 she lobbied successfully for the establishment of local Safer Neighbourhood Teams for every ward in her Chipping Barnet constituency. These originally consisted of one sergeant, two police constables (PCs) and three community support officers (PCSOs). Theresa later helped secure an increase in the size of those ward teams.

During Boris Johnson’s time as Mayor of London, crime levels fell in Barnet and across the capital. But the crisis in the public finances caused by the 2008 banking crash meant that police budgets were squeezed and this started to have an impact on officer numbers.

Theresa kept up the campaign for more police for the constituency. She raised this in Parliament, including in Prime Minister’s Questions and was part of a deputation of London MPs who met Prime Minister Theresa May to appeal to her to increase officer numbers. She subsequently welcomed a significant £170 million increase in the budget for the Met in the 2019/2020 financial year. That was part of a £970 million national settlement for policing to enable the recruitment of 3500 more officers.

When Boris put stood as a candidate to become leader of the Conservative Party in 2019, Theresa highlighted with him the importance of a further increase in police numbers. He made the commitment to 20,000 more officers bringing the total uplift to 23,500 across the country. Within the next couple of years, the Met is expected to grow to between 35,000 and 36,000 officers – the highest number ever.

Reflecting on her many years of activity on policing matters, Theresa said “When I knock on people’s doors to hear their views, they so often express concern that the police are not visible enough. That is why I will always fight for Barnet to get its fair share of officers. Many times over the years, I have secured increases in officer numbers. I have also kept in regular touch with our local police force, urging them to respond to concerns of constituents, especially on burglary, street crime and antisocial behaviour.”

“Now I am campaigning to save Barnet Police Station. It is a disaster that the Mayor has said he will shut down the building and sell it off. We need a location for local police officers. If they all have to be based miles away in Colindale, this will mean less time for them on the beat in my constituency. People will feel less safe as a result. I am urging people to sign my petition to save the police station.”

Theresa intervened to save Barnet Police Station when it was considered for closure in 2013. However, in 2017, the newly elected Mayor, Sadiq Khan, pressed ahead with the shut down of the front desk at the station in Barnet High Street. The building remained in police use but in September 2021, the Mayor indicated that it would be sold for redevelopment. Theresa’s campaign to save the constituency’s last police station continues.

Deputy Mayor urged to keep the police in Chipping Barnet