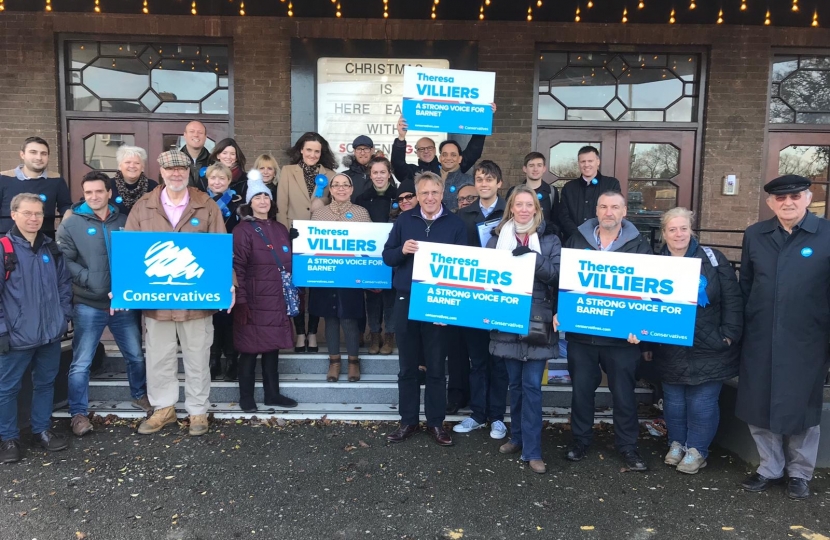 "As a teacher, I fully endorse Theresa Villiers as an advocate for education. Her commitments and achievements to date speak for themselves here. She is committed to investing in our schools and I have been proud to campaign with her on the Chipping Barnet doorsteps since this election campaign started. Jeremy Corbyn would be a disaster for our education system. His crusade against independent and grammar schools would place unprecedented pressure on all our schools, stretching resources to their limit whilst punishing hard working families with crippling taxes. A vote for Theresa and the Conservatives will stop the Labour Party from wrecking our local community, allowing her to serve our constituency and continue the outstanding work she has done for the past fifteen years. Harvey Ross, Teacher and Chipping Barnet resident

“Theresa has been a fantastic MP for the people of Chipping Barnet. As a local resident herself, she is completely community minded, has always been a brilliant advocate for local residents and is always willing to lend a hand. Theresa is standing with local residents against the Mayor of London’s plans to build tower blocks over the car park at High Barnet station. I would encourage people vote for her so that we continue to have a strong voice to represent us in Parliament.” Gail Laser, local entrepreneur and High Barnet resident

“Living in Barnet for over 20 years, medical services have improved dramatically. Theresa has played a huge role in this and we are lucky to have her on our side.” Dr Baboo Kabra, Whetstone resident

“Theresa has helped me access the best education for my family. She couldn’t be harder working and is and is always there when you need her” Anila Skeja, New Barnet resident

“Theresa is a principled politician who has been consistent in her views on Brexit matters and other major issues of national importance. That is why I have a high regard for her. She puts the interests of the country first. I have been living in Barnet for the past 20 years and have been impressed by the manner in which she has represented the interests of the people. She has been a superb MP serving the people of Chipping Barnet. I wish her every success”. Dr. S.P. Subedi, Underhill resident

“My husband and I have known Theresa since 2008. She was willing to listen to the problems of the Tamil Community and once she had fully understood our plight, she did everything in her power to support us. She has visited the UN with the team from the British Tamils Forum, to help them highlight the human rights issues that the Tamils have back in Sri Lanka. Theresa attends many Tamil Community events to show us her support. Theresa is now, known well amongst the community as a champion of the Tamil people. Theresa is an honest, sincere and hardworking MP. What impresses me most, about Theresa, is that, she has time for her constituents and is very approachable, making everyone feel comfortable, so that they are able to talk to her about any issue.  We wish her the very best.” Thaksha Ravikulan, East Barnet resident

“My name is Adele Winston, I live in Barnet and I have been a life long member of the Labour party and I am now supporting Theresa Villiers and the Conservatives because of the very real threat perceived by my community, the Jewish community from Jeremy Corbyn and the disgraceful way he has refused point blank to tackle the threat of anti-Semitism in the Labour party. Theresa has always been very supportive of our community, can be trusted to continue to do that and on December 12th I’m voting for Theresa and the Conservatives.” Adele Winston, Barnet resident and former member of the Labour party

“I’m supporting Theresa Villiers for many reasons but one of them is that she stands with the residents of High Barnet against the Mayor of London’s unfeasible development of High Barnet Station car park.” Gaynor Bond, founder of ‘Hands of High Barnet’

“Theresa has always supported the local shop keepers including Bayleaf. She even recommended us to House of Common’s Tiffin cup competition. I am a firm supporter of Theresa and wishing her all the success in the fourth coming election. I clearly know whom I am casting my vote.” Tofozzul Miah, Whetstone resident and local business owner

I’m urging you to re-elect Theresa Villiers as Member of Parliament for Chipping Barnet on the 12th of December. Theresa knows this constituency inside out, she understands the needs of its communities. I know that Theresa has a fantastic local plan for Barnet she wants, more funding for our hospitals, more nurses, more funding for schools, business rates cute to help our local high streets, campaigning against overdevelopment at High Barnet underground station. Theresa and the Conservatives are absolutely the right people to represent this seat. Theresa has stood up for communities right across this seat, for the Jewish community, the Tamil community, the Cypriot community and for many many more. And for me I know that the Conservatives will allow hard working people across the country to pay less tax and keep more of what they earn. Daniel Cohen, Hadley resident

“As a member of British Hindu and Indian community in North London, we will be voting to return a strong Conservative government. Theresa Villiers, has championed and supported causes of the British Hindus and British Indian community locally and nationally and has spoken in Parliament on issues of concern to us. Theresa has endorsed the importance of strong ties of friendship, trade, and culture between India and the UK. I know that Theresa worked tirelessly to protect fields at Whalebones and to oppose Labour plans to build high rise blocks in High Barnet and Cockfosters. She plans to secure sufficient police recruitment in Barnet to keep Barnet safe, NHS services will be expanded and GP appointment times will be readily available. I am delighted to support Theresa Villiers for a resounding victory in Chipping Barnet.” Dr Harsha Jani, Barnet resident

“Association of Anglo-Iranian Women together with the Anglo-Iranian Youths, Anglo-Iranian Community of the Greater London, Anglo-Iranian Medical Society and several others groups and associations strongly support Theresa Villiers to continue being our member of parliament. On 12th December, we all will be there to vote for her. Theresa has been in the forefront of defense for human rights. She is there for her constituents whenever they need her. Theresa has a strong sense of responsibility who does not leave a job unfinished. She is honest, listens carefully to you and is always determined to find solutions to the problems. Barnet is the main borough in the whole of the UK where the Anglo-Iranian community reside. Theresa is fully aware about the concerns of the various Barnet communities and her constituents. She has raised the cause of human rights in Iran in every opportunity from highlighting it in the parliament to speaking at the various settings. We have no doubt that Theresa Villiers will continue to represent Barnet constituents in the next parliament!” Members of the Iranian community in Chipping Barnet

“I have known Theresa for many years since I was in school, I know she’s a very strong campaigner, passionate about the local area, her family grew up here. She is an awesome MP and I am very very keen to make sure she returns as the member of parliament for Chipping Barnet. Do the right thing vote for Theresa.” Samuel Kasumu, author of ‘Winning the Race’

For 20 years, Theresa Villiers have been backing the efforts of Cypriots to find a just and lasting solution to bring the two sides together and reunite the island. In recognition of that, Theresa has attracted strong support for her bid to be re-elected as MP for Chipping Barnet from leading members of the British Cypriot community from across the political spectrum...

“I have known Theresa Villiers since October 1998. Theresa has been the strongest supporter of the Cyprus cause for the last 20 years, with passion commitment and determination. She helped also in many other issues our Community mainly Education. As a community leader I urge all her constituents to show their gratitude on 12th December to ensure that Cyprus continues to have such a valuable friend in Parliament.” Andreas Papaevripides, President of the World Federation of Overseas Cypriots (POMAK)

“Just to wish you well, once again. I remember well all the support you gave us both in Brussels and then in Westminster. I am sure you will be there for Cyprus and the community for years to come. My best wishes.” Haris Sophoclides, Former Chairman of National Federation of Cypriots UK

“Throughout her political career and from whatever post she held, Theresa Villiers has shown astonishing commitment to human rights and world justice. For her undiminished support to the people of Cyprus in as they strive for reunification of their island and a just and lasting solution, we owe her our full support and vote.” Leonidas Leonidou, President, Federation of Cypriot Refugees (UK)

“For two decades Theresa Villiers  has been a loyal friend of Cyprus, unceasingly supporting in every forum, either as an MEP, MP or government minister, the just cause of the Republic of Cyprus for liberation and reunification.  Theresa’s voice is the voice of Cyprus in Westminster and in Government, and both our community as a whole, and each one of us individually, are grateful for her unstinting work on behalf of all of us.  We must be united in our efforts to return Theresa as the MP for Chipping Barnet and ensure that a true friend and staunch ally of Cyprus remains in Parliament.” Elias and Stella Dinenis

“I am a refugee from Famagusta living now in Barnet. My vote goes to Theresa in appreciation for her tireless efford for free and united Cyprus.” Spyros Neophytou

“As a Cypriot refugee I followed over the years Theresa's support for Cypriot refugees, according to UN resolutions. My vote and support goes to Theresa.” Serafim Diakou, Ayios Theodoros Karpasia

“Being a photographer based in Barnet I followed Theresa's activities for the freedom and reunification of our homeland and admire her consistency and dedication. Thank you Theresa for fighting for justice for my long suffering motherland. You have my full support.” Petros Pentayiotis

“I live in Chipping Barnet and met Theresa Villiers 20 years ago. I feel she works very hard not only in her constituency but also fighting Cyprus's corner for freedom and unification. She is a strong supporter of our community schools especially in continuing of the exams on the Greek A-level. She has my unreserved support.” Elissa Ellina, Teacher

“I just simply wanted to say thank you for your hard work in seeking justice for my divided motherland.” Tasos Poyiatzis, Refugee from Karavas

“I urge every single Cypriot who lives in the Chipping Barnet constituency to vote for Theresa Villiers. She is President of the Conservative Friends of Cyprus and for 20 years she has been fighting for the reunification of Cyprus. Now in this crucial election on 12th December please let us show our appreciation for all the efforts Theresa has made to support Cyprus. Please give your vote to Theresa Villiers as a true friend of Cyprus and the Cypriot community.” Doros Partsaides, Cameraman-producer

“There comes a time when we must give a helping hand to those British politicians who fought our corner for Cyprus over the years. One such politician is our dedicated and committed friend, Chipping Barnet MP Theresa Viliers, who needs our help in the forthcoming general election. In view of her small majority, the Cypriot vote is crucial. In addition to your vote, she also needs our help in delivering leaflets, canvassing etc. If you can spare some time out of your busy schedule to attend some of the Action Days listed below.” Andreas Tambourides, Former Mayor of Barnet and councillor for Brunswick Park ward from 1998 to 2014