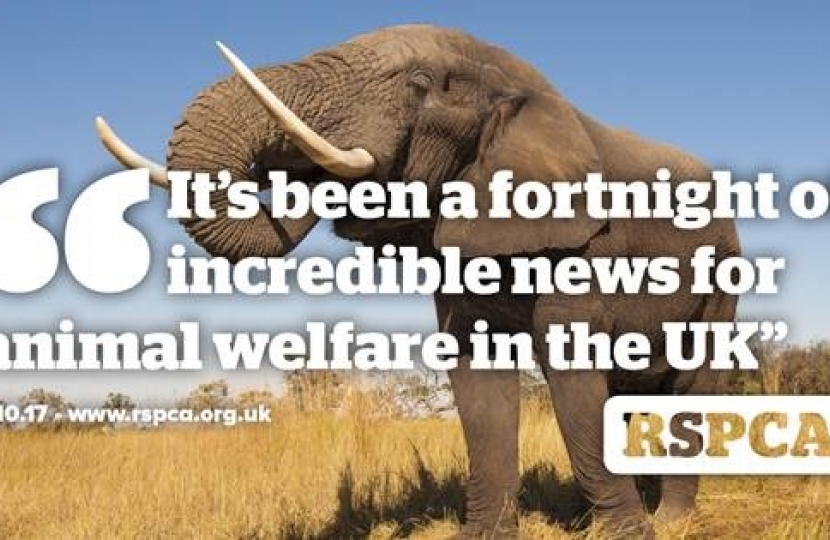 Theresa Villiers, MP for Chipping Barnet and long-time campaigner for improvements to animal welfare, has welcomed the news that the Government be introducing new laws on two important animal welfare issues. Firstly, the sale of ivory will be banned in the UK. Secondly the maximum sentence for animal cruelty offences will be increased by 900%.

Theresa Villiers has spoken up in Parliament on many occasions to call for stronger rules to protect animals from unnecessary suffering. In April and then in June this year, she called on the Department for Environment, Food and Rural Affairs (DEFRA) to increase the maximum sentence for animal cruelty cases up to five years. Previously, whatever no matter how horrific the actions of the offender, the maximum sentence a judge could impose was just six months. In September, Environment Secretary Michael Gove announced that the maximum sentence would be increased to five years in prison.

In July, at the request of a constituent, Theresa attended the lobby of Parliament by the International Fund for Animal Welfare (IFAW) to support their campaign to end the UK ivory trade.

An estimated 50 elephants are killed a day by poachers, to feed the demand for ivory. The UK must do its part to end this horrific slaughter.

Theresa Villiers said: “More constituents contact me about animal welfare concerns than more or less any other issue. So I have always tried to make it a priority.”

“Over recent weeks we have seen some really good news on animal welfare, with the announcement that ivory sales will be banned in the UK and sentences for animal cruelty will be extended. A six month jail term is completely inadequate for serious cases of animal abuse. I welcome the action the Government is taking on these two important campaigns which I have been involved with. The Conservatives care about animal welfare and they have listened to the people who have spoken out on these issues, including many of my constituents in Barnet.”

"I would like to congratulate the coalition of animal welfare groups who campaigned successfully for these reforms. Organisations such as Battersea Dogs and Cats Home and the RSPCA worked together very effectively to highlight the case for change."

On the 6th October, the RSPCA said in a statement that it had been a “fortnight of incredible news for animal welfare in the UK.”