Villiers welcomes important victory in campaign to save Greek A Level 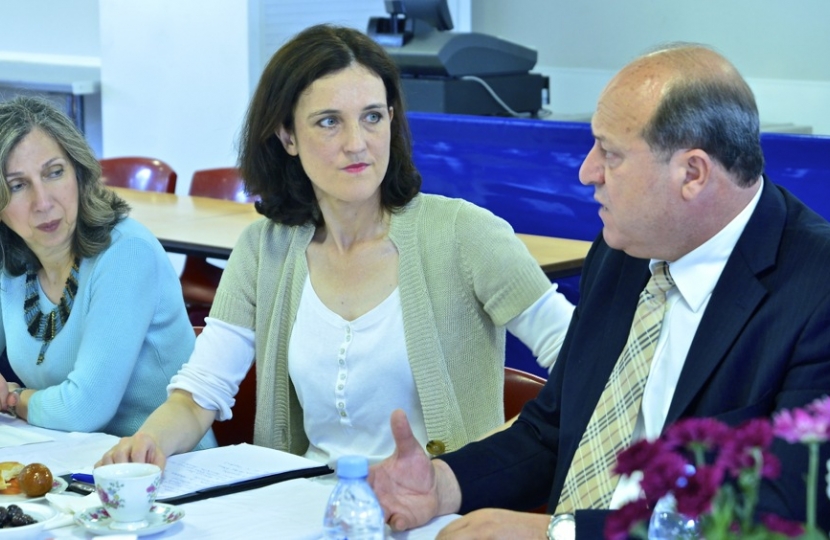 Theresa Villiers has welcomed an assurance from Nick Gibb, Minister for Education, that Greek A Level is to be retained until at least 2018, with exams regulator, Ofqual, comfirming that the qualification will be available until at least the summer of 2019.

Earlier this year, the A Level in Modern Greek had been threatened with abolition after exam board Edexcel announced that they planned to withdraw the qualification. Theresa met a delegation led by Michael Ellinas, head teacher of Manor Hill Greek School, and pledged her support for their campaign to save Greek A Level. In July, she took them to see Education Minister, Nick Gibb, to make the case to save this important qualification.

Mr Gibb subsequently issued a press release indicating that a number of language qualifications would be safe until at least 2018, allowing time for a long term solution to be found to save them, but Greek was not listed in the announcement. Theresa spoke to the Minister again and he has confirmed that Greek A Level was one of the languages that he had intervened to save. In a separate development, the exams regulator, Ofqual, has indicated that the recent intervention by ministers means that Modern Greek A Level is safe until the summer of 2019.

Theresa said "I warmly welcome the news that Greek A Level is safe until at least 2019. I and my constituents asked Education Minister, NIck Gibb, for help and he promised to find a way to do this. It is great news that he has confirmed to me that Greek is one of the language A Levels that he has stepped in to save."

"He has also assured me that he will use the three year breathing space given by this announcement to find a way to secure the long term future of Greek A Level. I believe that it would be damaging to community cohesion and to educational opportunities if my constituents could no longer study for Greek A Level. I will therefore be working with the Minister and the Cypriot community on finding that long term solution."

"I would like to thank Michael Ellinas and the group of educationalists and leading members of the Cypriot community who campaigned so effectively to save Greek A Level.  Many people worked together on this important issue but I would particularly like to mention Panayiotis Yiacoumi, President of the Greek Parents' Association, Andreas Chimonas, President of the Federation of Educational Societies of Greek Cypriots in England and Panayiotis Ttofis, Coordinator of the Central Educational Committee of the Greek Orthodox  Archdiocese of Thyateira and Great Britain. I look forward to continuing to work with them to ensure that Modern Greek A Level is confirmed as a permanent feature of the our educational curriculum."

Theresa Villiers meeting Michael Ellinas and other constituents earlier this year at Manor Hill School in the Totteridge Academy, to give her support to their campaign to save the A Level in Modern Greek.