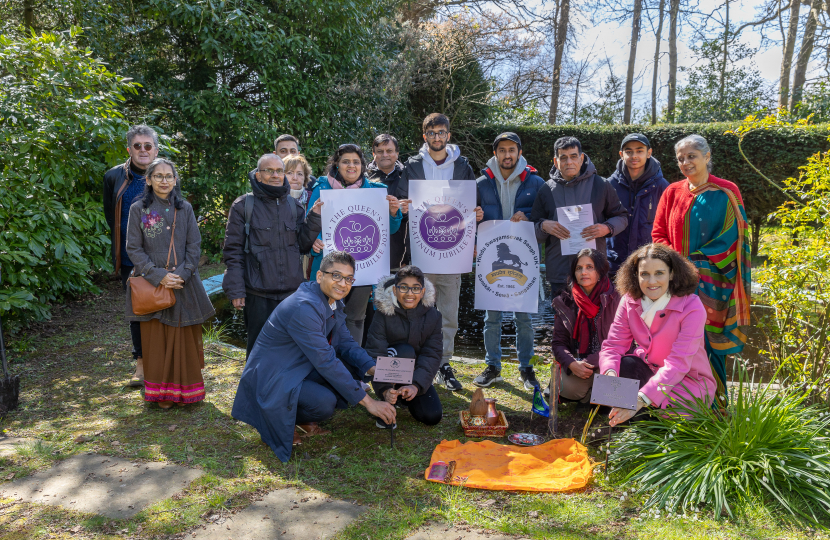 At a ceremony today organised by Hindu Swayamsevak Sangh (HSS), Theresa joined HSS supporters, Veer Sumaria and Sujal Depala, to plant the saplings in the grounds of Whalebones House, the home of Paddy and Helena Shanahan. HSS is a movement for young people which aims to inculcate Hindu values of selfless service to the community. They have a thriving branch in Barnet.

The trees will grow next door to fields that Theresa and local people have been fighting to keep in a long-running campaign to stop houses being built on them.

The saplings came from the Queen’s Green Canopy Project to mark Her Majesty's 70-year reign.

Prior to the planting, a colourful Hindu ceremony took place thanking mother earth (Bhumi) through the scattering of scented red coloured holy powder and rice. Vedic mantras were chanted and Vishal Shah of HSS UK welcomed the guests on the auspicious day of Varsh Pratipada - Hindu New Year.

“Planting these trees will be a positive legacy and a fitting tribute to Her Majesty’s unstinting service to this country and the Commonwealth over 70 years,” Theresa said.

“It is wonderful that HSS have been able to organise the event. I very much enjoyed the ceremony and the tree planting on a chilly but bright spring day.

“It will be a pleasure for everyone involved to watch the trees grow and become part of Barnet’s natural world.

“Thank you to everyone who got involved to make this happen, especially Paddy and Helena, who have generously allowed this planting to take place on their land.”

The first watering of the saplings used drops from the River Ganges, specially flown in from India for the occasion, mixed with water from the River Thames in a symbolic gesture of the close relationship between India and the UK.