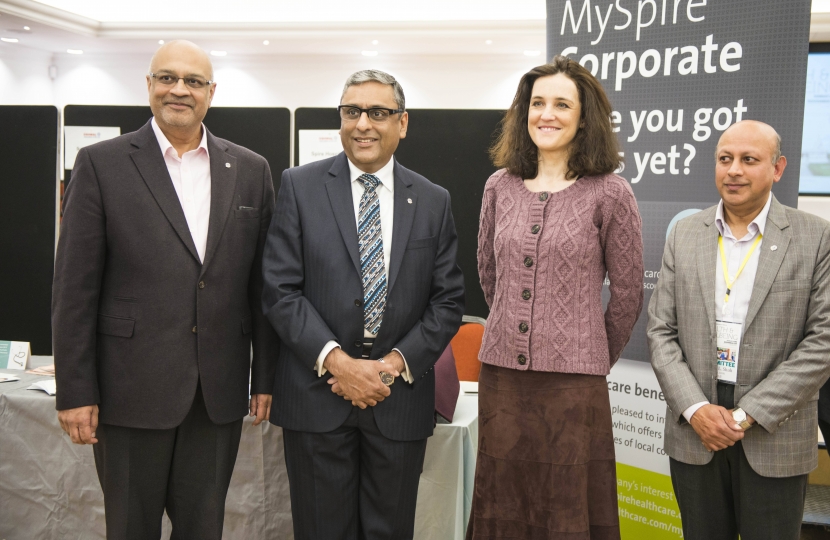 Theresa Villiers, Member of Parliament for Chipping Barnet, recently helped to launch a Health and Wellbeing Day attended by over 1200 people, hosted by the Oshwal Centre in Potters Bar earlier this month.

The event was run by the Oshwal Association of the UK, a registered charity and community organisation, whose members are largely followers of the Jain faith. The health and wellbeing event attracted members of the South Asian community from Barnet and across other neighbouring boroughs, and from as far afield as Leicester and Luton. Research indicates that the South Asian community is up to six times more susceptible to diabetes than the general UK population, as well as more likely to suffer from heart disease. Information at the event was given regarding healthy eating and healthy living, from cookery demonstrations to practical advice from nutritionists, from exercise demonstrations to yoga workshops. Lectures and workshops provided information on a range of issues including how to spot symptoms of various illnesses and conditions. Over 500 people were given free health screening and tests on issues such as BMI, blood pressure, and glucose levels.

Mr. Raaxeet Shah, the President of the Oshwal Association said, “Health plays such a big part in our lives, and to be able to hold the second Health & Wellbeing day in 5 years at Oshwal Centre makes me very proud of the work our community does. The fact that over 1,200 people have come today is a testament to the importance of health and wellbeing. We were honoured to have Theresa Villiers attend, and thank her for helping to raise awareness.”

Theresa Villiers said: “It was a pleasure to help launch the Oshwal Centre’s Health and Wellbeing Day, and to be shown around the centre and its Jain temple. With free screenings and practical information about healthy lifestyles, this event is an excellent initiative. Sometimes basic knowledge and understanding can make a huge difference to people’s health, and perhaps even save lives. I took part directly by volunteering to have my blood pressure and glucose levels tested. I was relieved to hear that they were both at healthy levels!”

The Oshwal Centre and the Oshwal Association exist to support the Jain community in the UK, and their work ranges widely: holding religious events, providing social events for the Jain community, supporting the learning of the Gujarati language, and providing education on health and welfare. The Oshwal community are largely from East Africa and can trace their history and heritage back to 52 villages in India, numbering 100,000 worldwide. 25,000 Oshwals reside in the UK. The event took place on Sunday 22nd November.