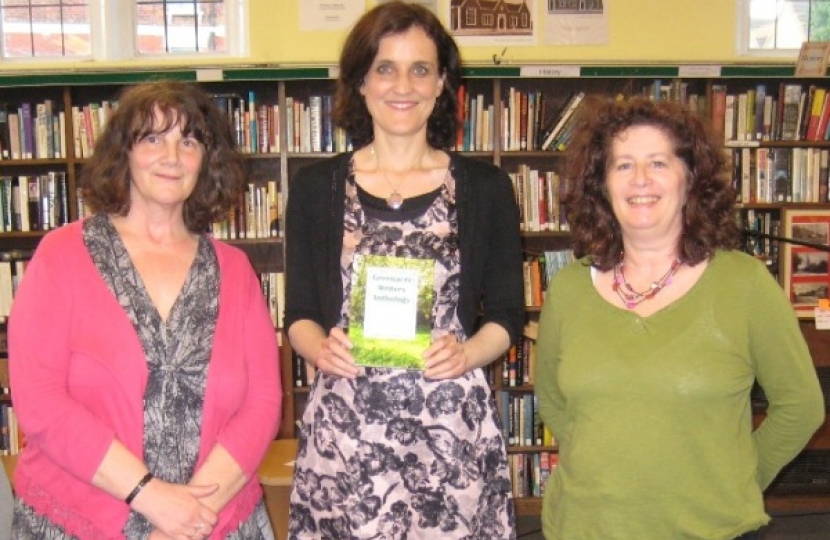 During the evening, prose and poetry was read out by authors from the Greenacre Writers group and others. Those taking part included Allen Ashley, who introduced the writers, Kit Habianic, Rosie Canning, Mike Gee, Carol Sampson, Bill Todd, Lindsay Bamfield and Michelle Shine.

Following the event, Theresa said "It was great to be here to support the Finchley Literary Festival. This event has gone from strength to strength in recent years and I would like to thank Rosie Canning, Lindsay Bamfield, Allen Ashley, Robert and Elizabeth Newton and Mike Gee for all their hard work in putting on this evening's Spoken Word Showcase."

"All the readings were of an exceptionally high quality. I particularly enjoyed Lindsay Bamfield's story about Dorothy Lawrence who was a war correspondent who disguised herself as a soldier to report on the front line in World War One. Sadly, in later life, she spent 39 years in the Friern Barnet mental hospital which is now Princess Park Manor".

"I'm impressed at the efforts the Greenacre Writers Group have made this year to reinvent and expand the scale of their annual literary festival."

"This evening was also a good opportunity to meet and chat with the volunteers who are supporting the Friern Barnet Community Library."

For more information about Greenacre Writers and the Finchley Literary Festival, visit their website at: