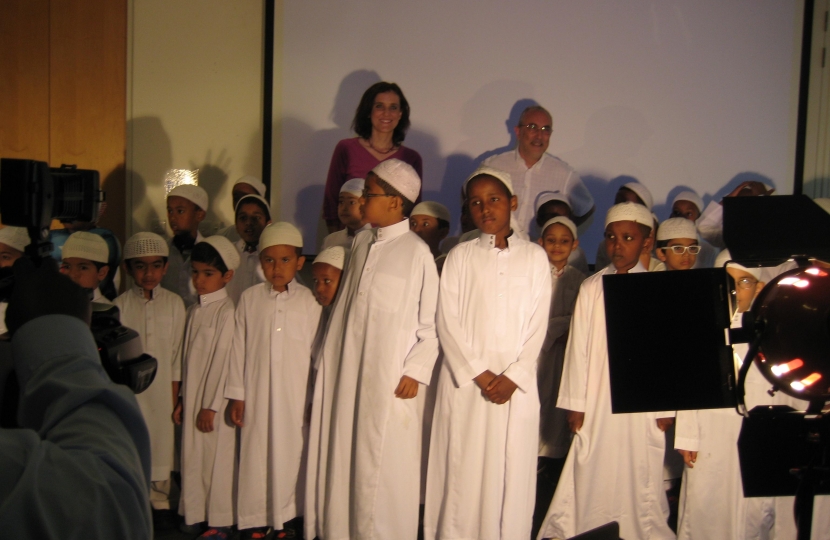 The event took place in Barnet Council's building in North London Business Park, in Theresa's constituency and was attended by about 600 people including well-wishers from a number of faith groups. The aim of the afternoon was to celebrate the achievements of the children and young people studying in the Arrahma community school, which runs classes in the evenings and weekends. Theresa was one of a number of speakers to address the event and show their support for the work of Somali Bravanese Welfare Association which runs the school.

The activities taking place included Quraan recitation, poetry and nasheeds (songs), along with presentation of awards to the best performing students.

Following the event, Theresa said "It was a real honour to be asked to take part in this event. The arson attack on the Somali Bravanese Centre in Muswell Hill last summer caused me grave concern and I am convinced that it was a hate crime. I am very pleased that the work of the Welfare Association has continued despite the loss of their building. It is incredibly impressive that they are providing excellent educational opportunities for so many children and young people, despite being housed in temporary accommodation."

"I am convinced that the educational programmes run by the Arrahma school are transforming lives for the better. I learned today of the range of communities involved in the school as demonstrated by the songs and poetry preformed in four different languages - Somali, Bravanese, Afghani and English."

"I warmly welcome the fact that Barnet's Conservative Council has provided the Welfare Association with temporary accommodation in Barnet House since the fire and that the council has pledged £1.1 million for a new centre. It was also heartwarming to learn that Finchley Reform Synagogue provided space the Somali Bravanese Welfare Association to say their Ramadan prayers last year and that they are proposing to do so again this year. This is a good illustration of the ability of different faith groups to work together in Barnet and support one another."

The aims of the Somali Bravanese Welfare Association are to advance education and help members of the community who need their help. They provide free and confidential advice, assistance, representation, counselling, translating and interpreting services in matters such as asylum, immigration, money, debts, welfare benefits, housing, health, education, training and employment.