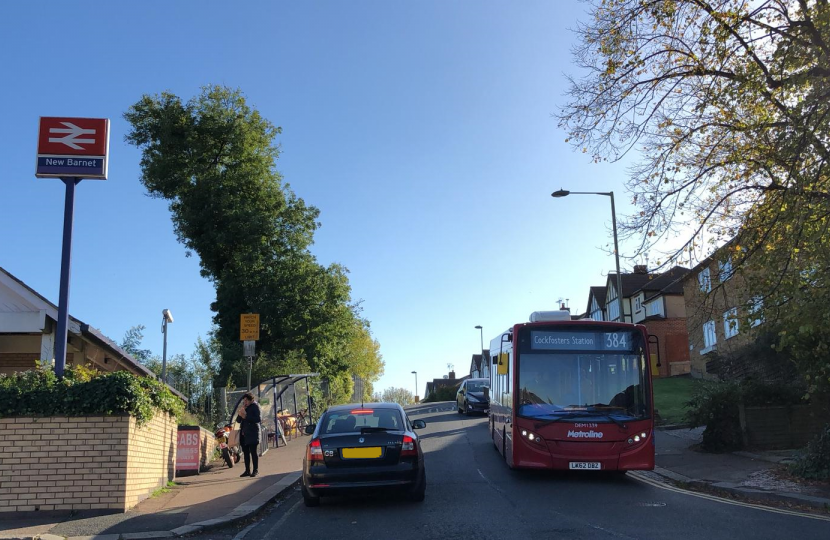 The decision by the Mayor of London to press ahead with cuts to the route of the 384 bus has been strongly condemned by Chipping Barnet MP, Theresa Villiers

The 384 currently travels through the heart of New Barnet and the Bevan Estate but will now be rerouted away from Gloucester Road, Lyonsdown Road, Longmore Avenue, York Road, East Barnet Road, Brookhill Road, Crescent Road, Castlewood Road and Northfield Road. None of these roads will be part of the amended route for the bus. All of them will lose their bus stops, meaning a much longer walk for elderly residents to get a bus.

“Sneaking this news out during the worst health emergency for decades is a disgrace,” Theresa Villiers said.

“The Mayor and TfL should feel ashamed of themselves. The 384 bus route is a lifeline for many elderly residents who very strongly oppose the changes which have now been given the green light. My constituents will feel massively let down that they concerns have been ignored.”

“The Mayor has left this issue in limbo for over a year and now suddenly decides to announce the decision at a time of national emergency when residents are severely constrained in what they can do to organise and campaign to save their local bus. It is deeply cynical of Mayor Khan to do this.”

“This is yet another demonstration that the Mayor of London does not care about suburbs like Barnet. He’s massively mismanaged Crossrail and the TfL budget and my constituents are paying the price for this. TfL said they would hold a public meeting for residents to express their views, and even that promise has been broken.”

“The loss of this vital bus service in so many residential roads is a heavy blow for my constituents. I urge the Mayor to think again and keep the 384 route as it is.”

Theresa Villiers campaigned strongly to try to save the 384 bus route, working with residents and local councillors such as David Longstaff, Felix Byers and Robert Weeden-Sanz. As well as residents in New Barnet and the Bevan Estate, many people living in Salisbury Road in High Barnet are also against the new route because of the problems that will be caused by the proposal to run buses down their street, which is far too narrow for this to be appropriate.

Several petitions were set up to try to save the 384 bus route with over a thousand signatures collected. The TfL consultation on the bus route ran from 10th September to 9th November 2018.