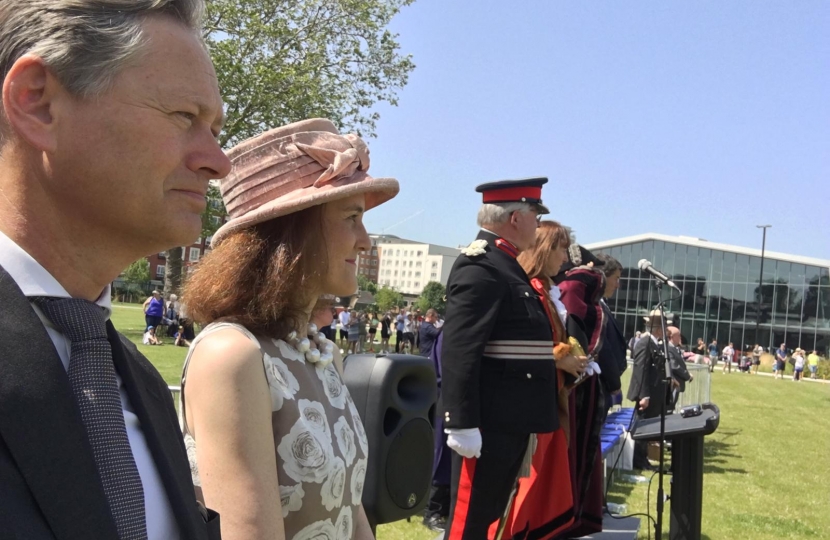 Chipping Barnet MP Theresa Villiers has paid tribute to our brave servicemen and women as the borough of Barnet marked Armed Forces Day at the weekend at celebration event on Saturday at RAF Museum in Grahame Park Way.

The Worshipful Mayor, Cllr Caroline Stock, presided over the parade of and raised the Armed Forces Day flag.

“It was a privilege to attend what is an important event for Barnet to honour the men and women who are serving in our forces on land, in the air, and on the sea,” said Theresa.

“75 years on from the D-Day landings, sadly there are fewer and fewer World War Two veterans still with us – the men who fought for our freedom on the Normandy beaches. So we must value all the heroes who remain with us, those who fought in past conflicts and all the members of our present day armed forces. They all make great personal sacrifices to keep us all safe. Armed Forces Day is a great opportunity to express our gratitude and pay tribute to these amazing men and women.”

In addition to the flag ceremony and the parade, entertainment was laid on at the event including The Barnettes vintage singing trio and the Military Wives Choir.

Pictures are attached for your use. One of these features Theresa Villiers, Matthew Offord MP and Representative Deputy Lord Lieutenant, Martin Russell; and the other shows Theresa  with Cockfosters resident, the Normandy veteran Mervyn Kersh.