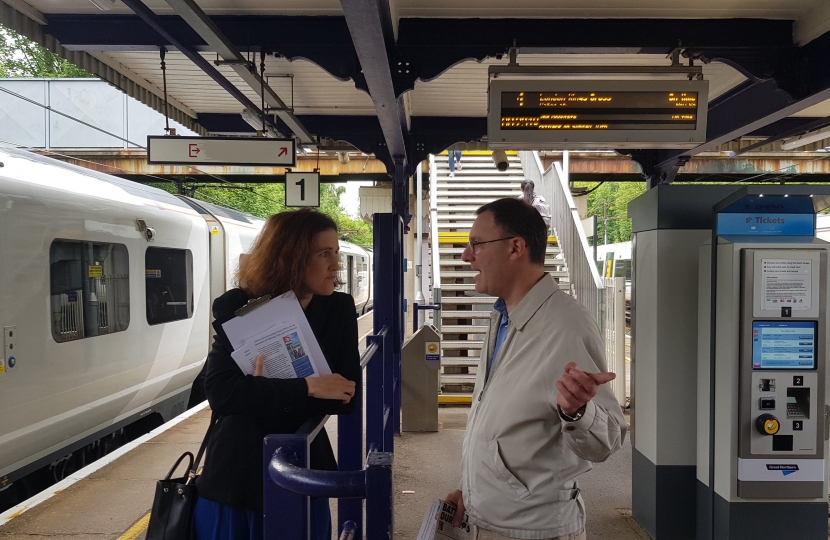 On the first working day of the new summer timetable Chipping Barnet MP Theresa Villiers is once again urging GTR to improve reliability on Great Northern rail and also to press ahead with restoring the two morning peak services removed from the timetable at Oakleigh Park and New Southgate.

When she met him at Westminster earlier this month, Theresa obtained the confirmation from Govia Thameslink Railway’s Head of Strategic Planning Phil Hutchinson, that these missing services would go back into the timetable in December. She has also sought and received the same undertaking from Chris Grayling at the Department for Transport.

The two services were scrapped just over a year ago from both stations and their removal has caused problems for commuters ever since. The two trains will run again when new Class 717 trains are introduced, several months later than originally promised.

“It is a relief that both GTR and the Department for Transport are still committed to the restoration of the services removed from the morning timetable at Oakleigh Park and New Southgate,” Theresa said.

“Nevertheless, it is deeply frustrating that it is taking so long to get this done. Until the disastrous timetable launch of May last year, the missing services were due back in December 2018. It is hugely unfair that my constituents have had to wait an extra year with a reduced timetable because of that very serious collective failure by the rail industry.”

“GTR must also get a move on with introducing the new Class 717 trains. The sixth and seventh of these trains are due to come into service by the end of this month but GTR needs to get the whole fleet in operation. It is only then that the two morning peak services removed from the timetable at Oakleigh Park and New Southgate can be brought back.”

At her meeting with GTR, Theresa also discussed the £15m Passenger Benefit Fund the company has been required to set up as a result of the timetable disaster last year. GTR is consulting with passengers on what to spend the money on and suggestions can be left at:

“I would urge passengers to send their views into the consultation on how to invest this fund. This money can’t make up for the hassle and disruption caused by the May 2018 timetable crisis. But every effort should be made to ensure it is used in a way which benefits those whose journeys were affected by the disruption last year,” Theresa added.