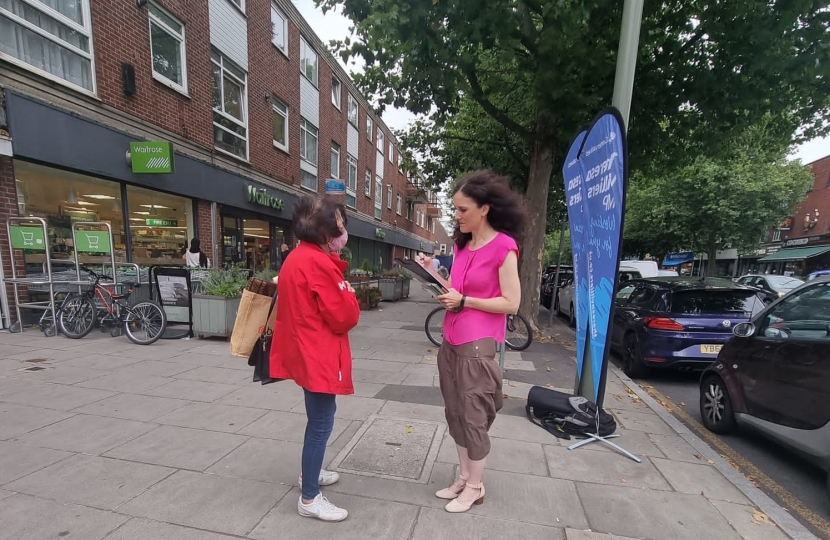 Theresa Villiers MP campaigns all year round on important issues for her constituents. Every year in August she has a week when she steps up programme of doorstep calls and engagement with constituents.

Her 2021 Summer Campaign Week has just drawn to a close, running from Saturday 21st to Saturday 28th August.

Theresa and her team knocked on hundreds of doors in the Chipping Barnet constituency to hear directly from residents on their worries and concerns.

The Barnet MP ran a series of mobile surgeries including in Whetstone High Road, Tesco Colney Hatch, and Sainsbury’s, New Barnet. She also fitted in visits to local businesses and to Barnet’s Jobcentreplus to hear about how the Government’s Plan for Jobs to help people get back into work.

Reflecting on this busy week, Theresa said “It is great that face-to-face democratic engagement is no longer constrained by Covid rules. As soon as restrictions eased in the spring, I was keen to get out on the doorstep again to hear from constituents.”

“It’s important to use modern methods of communication as an MP, but the traditional ways to keep in touch with constituents are also crucial. That’s why I like to be out on the doorstep as often as I can.”

“Over this past week, I was worried to hear how many people were concerned about crime and the closure of our local police station by the Mayor of London. I will keep up the fight to save it.”

“Another issue which came up again and again during the hundreds of conversations I had during my campaign week was overdevelopment. It feels as if we are under siege from proposals to build flats. I will always campaign against building plans which are wrong for our local environment and I am working to persuade the Government to think again about high housing targets and liberalisation of planning law.”

"Thank you to all the volunteers who have helped out over the past few days and thank you to all constituents who took time to speak to me and tell me their views."

Theresa was supported in her summer campaign efforts by teams of volunteers from the Chipping Barnet Conservatives.