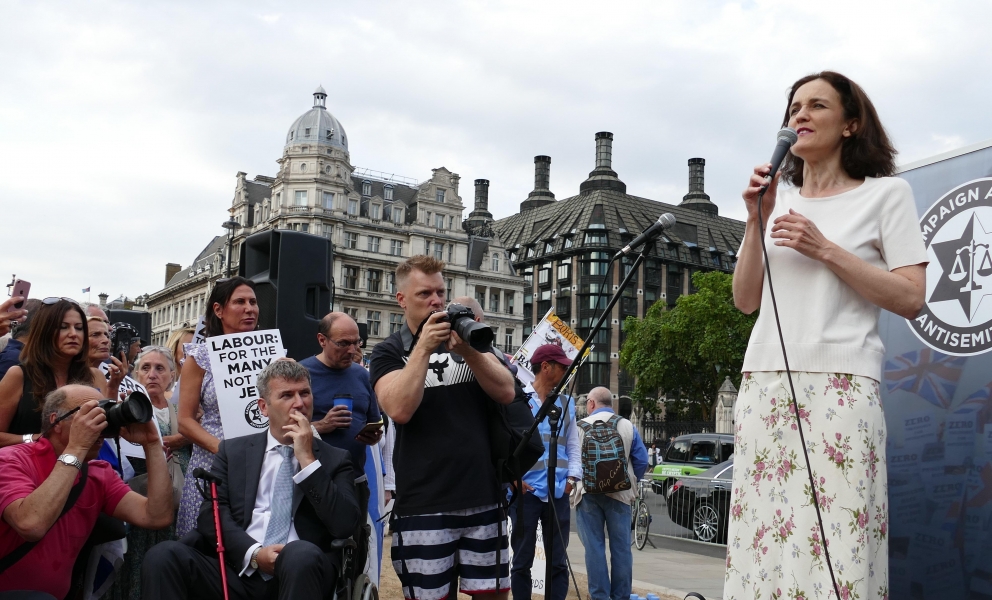 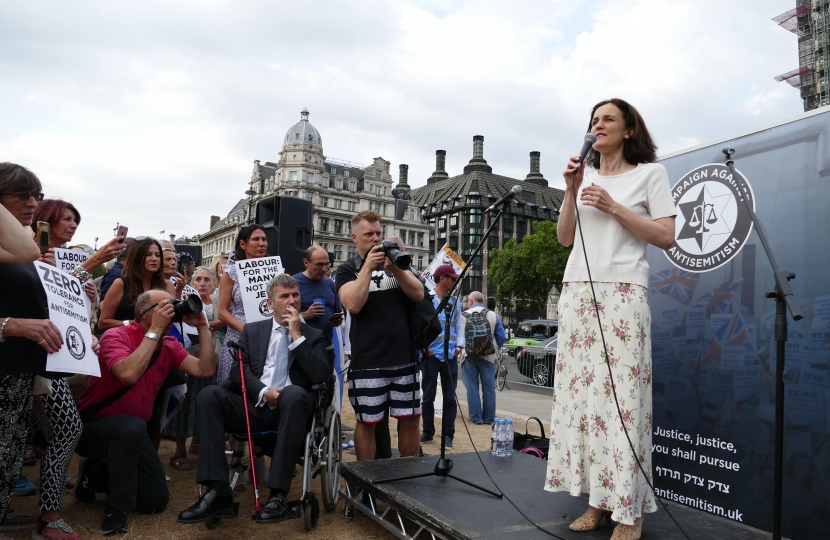 Theresa Villiers was one of the only MPs to turn out to show solidarity with the Jewish community at a second protest in Parliament Square against antisemitism in the Labour Party.

The protest was organised a short notice by the Campaign Against Antisemitism and took place on 19 July, following on from a similar event in March. In her speech to the rally, Theresa described Labour’s failure to deal with antisemitism as ‘shocking’ and ‘unacceptable’ and pledged her support for the Jewish community’s campaign for action to tackle this appalling problem.

The key aim of the event was to urge Labour to adopt the internationally recognised definition of antisemitism, as set by the International Holocaust Remembrance Alliance (IHRA). So far, this has been resisted by Labour, apparently because they do not agree that calling the existence of the State of Israel ‘a racist endeavour’ is antisemitic.

The Board of Deputies, JLC and CST have accused the Labour of “failing British Jews and failing as an anti-racism party”. This month’s protest follows the Board and JLC’s unprecedented #EnoughisEnough demonstration against antisemitism in March, protesting about Labour’s handling of the problem.

In the run-up to the July protest, the Campaign Against Antisemitism wrote on its website, that: “the Jewish community has been consistent and clear in demanding that the Labour Party follow the Government, police, other political parties and even its own MPs in adopting the International Definition of Antisemitism. Now the NEC has crossed the Rubicon and defiantly adopted its own deeply inadequate definition. We have long stated that the Labour Party under Jeremy Corbyn is institutionally antisemitic and unsafe for Jews. We have watched as brave activists fought from within Labour to save their political home from the clutches of antisemitism. The anti-racist Labour Party of old is now dead and gone.”

Speaking after the rally, Theresa Villiers said “It is truly shocking that once again hundreds of people have felt the need to come to Parliament to protest against antisemitism in a mainstream political party. Antisemitism is something we all hoped would steadily fade away and become more and more marginalised. It is frightening to see it appear in the official opposition. There have been problems with antisemitism on the radical left for years, but under Jeremy Corbyn, this has become an issue in the mainstream of the Labour Party. This is completely unacceptable. Labour need to get a grip and deal with this. They should listen to today’s protest and adopt the full IHRA definition right away.”