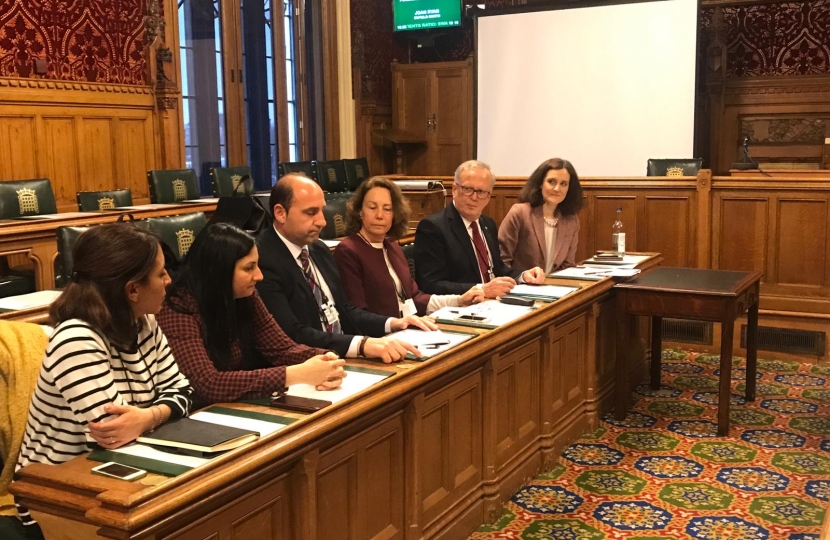 Chipping Barnet MP Theresa Villiers hosted a meeting of Conservative Friends of Cyprus with the Committee on Missing Persons in the House of Commons last week.

The three members of the Committee were present: Gülden Plümer Kücük, Turkish Cypriot Member, Nestoras Nestoros, Greek Cypriot Member, and Paul-Henri Arni, Third Member, United Nations nominee. They spoke about the progress made by their committee in seeking to establish the fate of the 2002 Missing People in Cyprus. 927 have been identified but over half of the families of the Missing still do not know what happened to their relatives.

Speaking after the meeting, Theresa Villiers said “It was an honour to host this important discussion in Parliament. The Committee on Missing Persons does hugely important work in seeking to find answers for the families who lost relatives. One of the saddest aspects of the division of Cyprus is that there are still more than a thousand families do not know what happened to their loved ones and have no remains to bury.”

“I am full of praise for the work of the CMP bringing comfort to families on both sides who want to know what happened to their fathers, brothers and sons. I strongly support the work of the CMP and it was good to hear an update directly from the committee members.”

“The UK Foreign Office part-funds the CMP and I have kept up the pressure for this to continue. Following my meeting in Parliament, I will raise this matter with the Foreign Secretary to emphasise the importance of maintaining UK Government financial support for the CMP.”

The meeting with attended by MP for Hendon, Matthew Offord, and by various leading members of Conservative Friends of Cyprus.