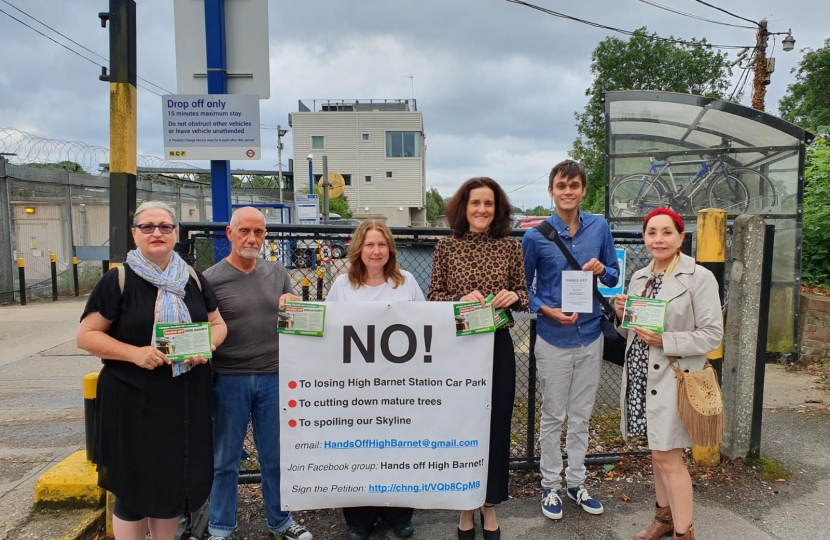 The Conservative MP has written to the Secretary of State for Housing, Robert Jenrick, asking him to stop the Mayor ‘calling-in’ the controversial high-rise, high-density schemes to build flats at High Barnet, Cockfosters and other suburban stations.

The process of ‘calling-in’ effectively allows the Mayor to be the final arbiter of his own schemes, which are strongly opposed by Theresa and many local residents.

“The Mayor controls Transport for London. At his direction, TfL have submitted these plans for hundreds of flats that are totally out of keeping with the suburban nature of Barnet,” said Theresa.

“There is much disquiet from Barnet Council and residents’ groups about the enormous power the Mayor can wield to push these terrible plans through. He is being allowed to be the judge in relation to his own schemes and this cannot be right.

“I have urged the Secretary of State to change the planning rules to stop the Mayor from being able to call-in the tube station schemes.

“I have also made the point that allowing the Mayor to call-in any application involving more than 150 units is unfair and interferes too much in local decision-making. The threshold for intervention by the Mayor should be raised.

"Finally, I have appealed to the Secretary of State to reject the Mayor’s London Plan because of the excessively high targets for new housing it contains. This will inevitably lead to the urbanisation of the suburbs and harm the quality of life of my constituents.”

Secretary of State, Robert Jenrick, is expected to make a decision soon on whether or not to approve the Mayor’s London Plan on future development in the capital.