Villiers heads out with police pursuit drivers on patrol 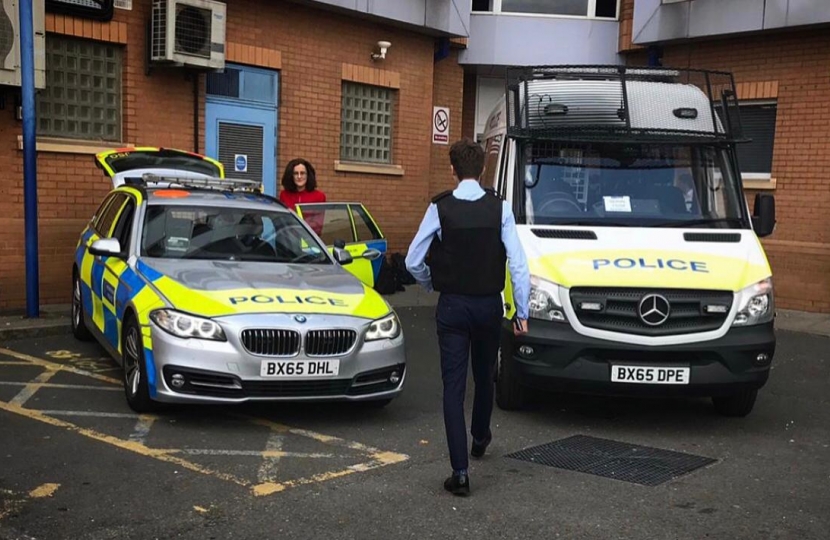 MP Theresa Villiers has been out with police rapid response drivers responding to 999 calls in Barnet.

She then attended a briefing for all the officers about to begin their shift before she joined two emergency response officers driving around her constituency attending emergency calls.

Theresa was present when the officers were called to several incidents, including high speed responses. When a burglary was reported in Friern Barnet, Theresa had a chance to speak to the victim of the crime.

Others calls included stopping an unlicensed driver, who then had their car confiscated, and intervening when someone reported a furious argument within a family taking place on the street.

“I would like to thank Chief Superintendent Leach and her officers for allowing me to see at first-hand the dedicated work they are doing to try to keep my constituents safe from crime,” said Theresa.

“It was perhaps a routine Friday evening for the police, but not for those who were victims of crime or for those who committed offences. It was invaluable experience for me to see how both were dealt with. My time with officers on the front line gave me a fresh insight into how crucial their work is. And I’ve certainly never experienced such high speeds on roads in my constituency before!”

“I was impressed to hear that our Borough Commander gives new PCs an extra six weeks’ training on top of the Met’s usual basic training, including a focus on ‘soft’ skills to enable them to engage more effectively with the community.”

“My time with the police on patrol in Barnet also gave me a good opportunity to emphasise how concerned my constituents are about burglary. I will continue to campaign for more officers to support the vital work the police are doing in Barnet.”