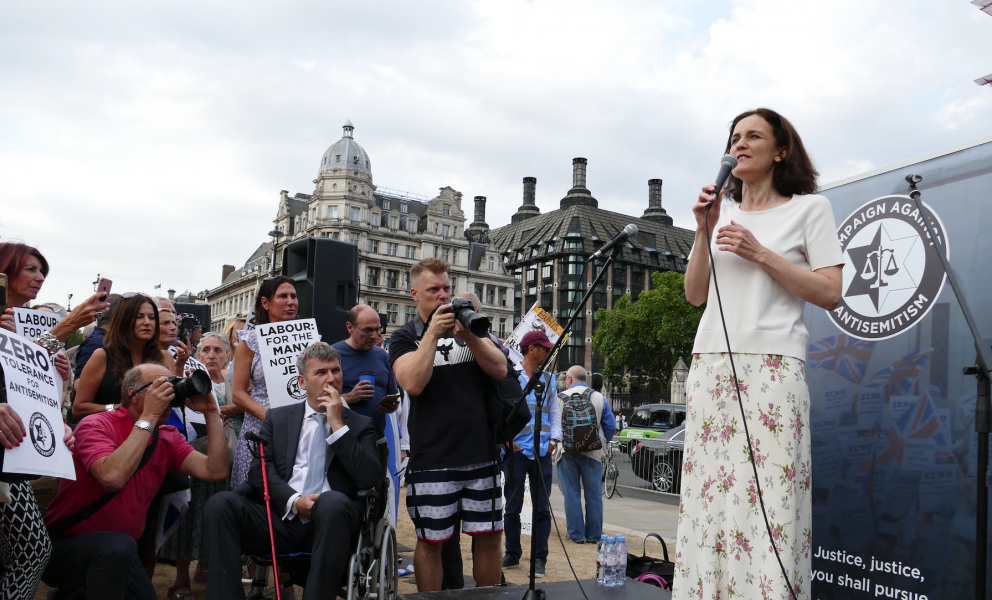 Villiers campaigns against racism and antisemitism 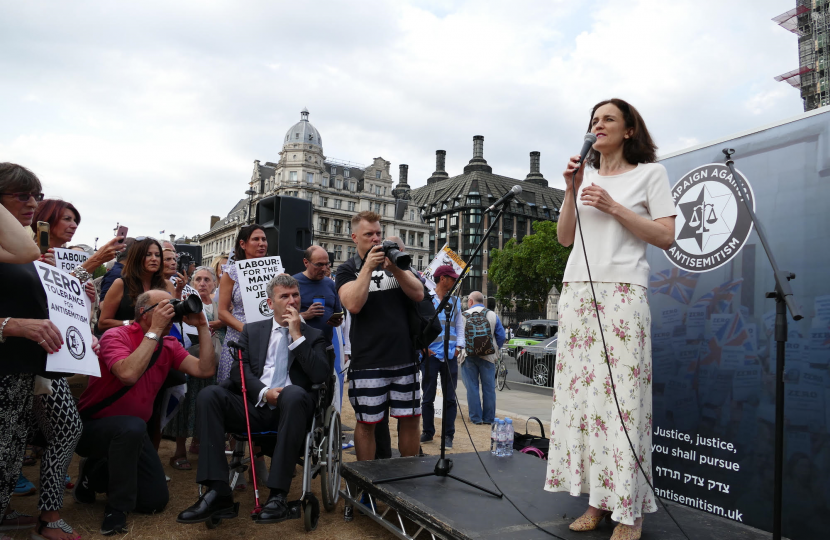 I have a long track record of campaigning against antisemitism. One of my first ever visits to Parliament was just over 30 years ago when I was a student and took part in a mass lobby to urge the UK Government to do more to press the Soviet Union to end its human rights abuses against Jewish Refuseniks. More recently, I took part in both the deeply moving debates in the House of Commons on antisemitism and raised this issue in Prime Minister’s Questions.

Whilst a member of David Cameron’s Government I strongly supported the decision to provide special funding for security at Jewish schools. I have also enthusiastically backed the funds committed more recently by the Conservative Government to protect places of worship. I have been a member of Conservative Friends of Israel for 20 years and have always spoken up in favour of Israel’s right to defend its citizens from terrorist attack. I have visited Israel a number of times to meet key figures and hear for myself about the efforts being made to try to deliver a peace settlement.

As a member of the All Party Parliamentary Group Against Antisemitism, I helped produce its ground-breaking 2006 report which delivered significant changes in how we tackle antisemitism in Britain. For example, it led directly every police force around the country recording antisemitic incidents separately and systematically.

That report highlighted the presence of antisemitism online, but this 2006 assessment is dwarfed by the sheer scale of the anti-Jewish venom now found on social media, including wholly unacceptable abuse of MPs.

The 2006 report warned that, quote: “It is increasingly the case that, because anger over Israel’s policies can provide a pretext, condemnation of antisemitism is often too slow and increasingly conditional”. 13 years on, this has proved to be a prescient statement. It is at the heart of the concern felt about the failure of the Labour leadership to stamp out antisemitism in their party.

I found it shocking that the Board of Deputies were so worried about Labour antisemitism that they held a protest outside Parliament. That the need was felt to organise a second protest is even more worrying. I was the only MP to attend both events.

In a harrowing debate in April last year in the House of Commons, I found it disturbing to hear about the antisemitic abuse and threats to which a number of MPs have been subjected. That fact that much of it appeared to come from Labour’s own members and supporters was all the more shocking.

I believe that powerful debate should have been a turning point, a point at which the Labour leadership gripped this problem and took action to rid the party of this poison. Yet it took another four months of wrangling before they actually managed to adopt the internationally recognised definition of antisemitism overseen by the International Holocaust Remembrance Alliance.

And the cause of that prevarication and foot-dragging? Attempts by the Leader of the Opposition to preserve the right of Labour activists to call Israel “a racist endeavour”.

There are many who have deeply held concerns about Mr Corbyn’s attitude on this issue. He is, after all, the person who once accused “Zionists” of having “no sense of English irony, despite having lived here all their lives”.

He attended a ceremony which appeared to commemorate the Black September terrorists who slaughtered Israeli athletes at the Munich Olympics. He has shared platforms with and promoted a number of antisemites, including inviting the blood libel antisemitic conspiracy theorist, Shaikh Raed Salah, to Parliament. Mr Salah is a man who described Jewish people as ‘monkeys’ and ‘bacteria’ and yet the Labour leader chose to describe him as “a very honoured citizen”.

These may be past episodes but the present response of the Labour leadership to the antisemitism crisis in their party continues to be wholly inadequate.

It was deeply depressing that in response to Mr Corbyn being criticised for supporting an antisemitic mural, 2000 of his supporters signed up to a Facebook statement defending him from what was described as: “a very powerful special interest group mobilising its apparent immense strength against you”. So these Corbyn supporters resorted to an obvious antisemitic trope in their attempt to defend their leader from the allegation that he was not taking antisemitism seriously enoug

Concern about this issue has seen a number of Labour MPs resign in protest from their party, many of whom have track records in Labour stretching back over their whole adult lives.

When Enfield North MP, Joan Ryan, left Labour, her resignation letter was one most hard-hitting of any I have ever read. She said that a message of optimism has been replaced by “an all-consuming narrative founded on rage, betrayal and the hunt for heretics”. Pointing out that it is three years since the Labour leadership pledged to tackle antisemitism, she said

“At every turn it has resisted, ignored and snubbed the legitimate demands of the Jewish community, made through their representative institutions. Instead it has offered whitewash reports. It has operated a revolving door disciplinary policy with those accused of antisemitism briefly suspended then quickly re-admitted to the party.

And it has allowed its surrogates to belittle the scale of the problem and attack those who try to bring it to light”.

This attitude led Joan to conclude: “Given a choice between the support of antisemites, and ridding the party of Jew-hate, they [the Labour leadership] have decided to side with the antisemites.

Even Labour’s Deputy Leader, Tom Watson has said that he sometimes doesn’t recognise his own party: “We all know in our hearts that we have been too slow to respond to the shaming scourge of antisemitism in our ranks.”

Chris Leslie, former Labour Shadow Chancellor, described Labour as “hijacked by the machine politics of the hard left”. Chuka Umunna said Labour had passed the threshold to be considered institutionally racist. Mike Gapes confessed that he was sickened by the fact that the Labour Party is now “a racist, antisemitic party”.

And now the situation has become so serious that the Equalities and Human Rights Commission is formally investigating Labour.

Even the Labour Party in Chipping Barnet is not immune from this problem, failing to act when antisemitic comments made at one of their meetings was reported to them by one of their members – a lifelong Labour vote who is now supporting my election campaign.

The leadership of the Jewish community is clear that far more effective action is needed from Labour to address this problem. The Board of Deputies have expressed their disappointment at the lack of leadership on this matter shown by Jeremy Corbyn. Leading Rabbis, such as Jonathan Romain from Maidenhead, are now urging people to vote for whichever candidate is best able to stop Labour from winning. In Chipping Barnet, that is me.

I have always been a strong friend of the Jewish community and I will always support all of Barnet’s different communities and celebrate our borough’s diversity. For example, when the Somali Bravanese Welfare Association has their Islamic cultural centre in Muswell Hill burned down in a racist attack in 2013, I worked with Barnet Council to secure a new building for them which they finally moved into a few weeks ago.

Jonathan Goldstein, the Head of the Jewish Leadership Council has warned that the election of Jeremy Corbyn as Prime Minister would pose threat to the Jewish community. In a few weeks’ time this could be a reality – it could be Prime Minister Corbyn waving from the steps of Number 10 on Friday 13th December.

Every morning we seem to wake up to another antisemitism scandal within the Labour Party, with another Labour candidate tweeted something or posting an offensive comment on Facebook. Labour is not fit to govern and I appeal to everyone who lives in the Chipping Barnet constituency, whatever their faith, culture, or background, to give me their support in the general election.

To reiterate the message from the rallies in Parliament Square: here can be no place for antisemitism or any form of racism in British politics; enough is enough.